Some fields of sorghum may have problems with non-uniform emergence for various reasons. In some cases, the surface soil was dry and some of the sorghum did not emerge immediately, or may not have emerged at all. In other cases, cool, wet soils slowed or reduced emergence on early-planted sorghum. Insect damage can also cause emergence problems.

Plants at different stages of development

If the stand has not been reduced substantially, there is seldom cause for concern with sorghum (Fig. 1). This is in contrast to corn. With corn, if some plants are developmentally ahead of others, this can lead to yield reductions. Plant-to-plant uniformity is a critical aspect in corn production systems. But there is little data to document severe yield reductions in sorghum, provided the plants have emerged within a period of 10-14 days of each other.

Sorghum often has tillers that act something like late-emerging plants. Usually these early tillers contribute a significant portion of the grain yield. Late-emerging plants may head and bloom slightly later than the early-emerging plants, but the difference typically is not nearly as great as the difference in emergence dates. As long as the sorghum does not lodge and is not killed by an extremely early frost, these later heads will fill adequately and mature in time for a normal harvest.

We would rather see a nice uniform field, but it is probably not worthwhile to destroy a stand and replant just because a significant percentage of plants emerged several days later than the others. 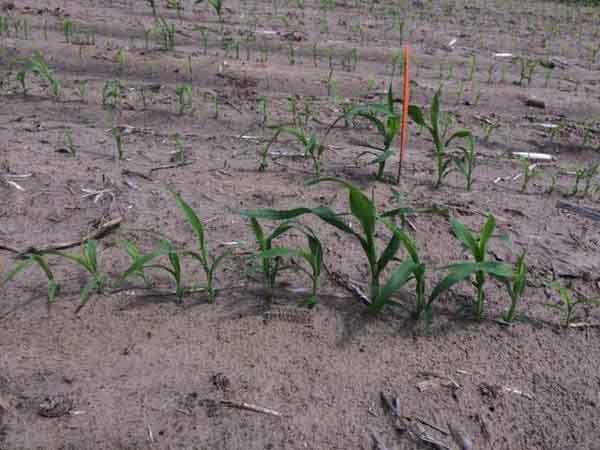 The second result of delayed or reduced emergence may be a reduction in stand, often in a non-uniform manner (Figure 2). Sorghum is notoriously non-responsive to changes in stand within a fairly wide range for a given environment. Often it takes a reduction of more than 25 to 30% before yield is reduced, as long as the plant spacing is relatively uniform. 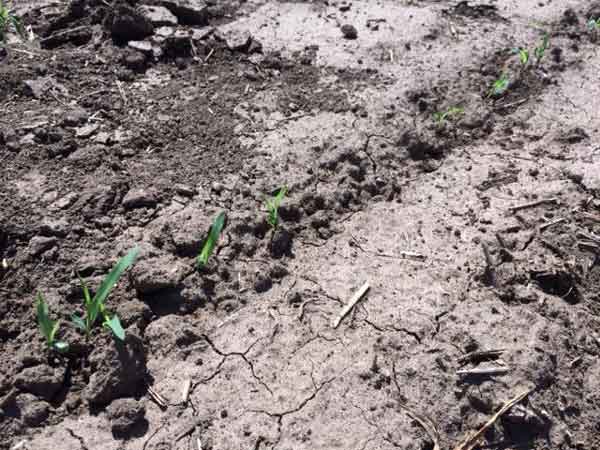 Figure 2. A field of sorghum with differences in emergence, Riley County. Photo by Ignacio Ciampitti, K-State Research and Extension.

Several years ago Richard Vanderlip, K-State crop physiologist, examined the impact of reductions in stand and the number and size of gaps in sorghum plantings in experiments at Manhattan and St. John. Some conclusions from that work:

1. Plants within the row containing skips and in adjacent rows compensated for missing plants by producing more heads per plant, more seeds per head, and – to a lesser extent – heavier seeds.

3. Yield compensation increased as plant spacing uniformity improved. Yield reductions were more likely or severe where skips resulted in severe lack of uniformity within the plant spacing and there were large gaps side-by-side in adjacent rows.

Every field will be different, but the research seems to indicate that stand reductions must be at least 25% to 30% or more before yields are affected, even with occasional gaps up to 9 feet long. Gaps of less than 9 feet likely will not reduce yield provided adjacent rows have no gaps and stands are not reduced by more than 25%.

Sorghum has a great capacity to compensate for stand reductions, which reduce the impact on non-uniform stands on the crop yield. Keeping an established stand is usually the better choice than spending the money and facing the risks associated with destroying the stand and replanting, provided the stand has not been reduced too much and does not contain too many large gaps. Risks of yield reductions with replanting will increase as the season progresses and planting dates get later.