The benefit gained by rotating canola with winter wheat is a major factor contributing to canola expansion in the southern Great Plains. Information from Oklahoma showed an increase in the number of tillers and forage dry matter for winter wheat when planted after canola. Another study from Oklahoma showed a 10% average yield gain for wheat grown in rotation with canola as compared to continuous wheat (Fig. 1). Information from K–State (2012 season) documented yield improvements in the range of 10 to 30% for wheat after canola as compared with continuous wheat (Fig. 1). Similar winter wheat yield gains following canola have been documented in other states as well (e.g. in Washington state there was an increase of 13 bu/acre). 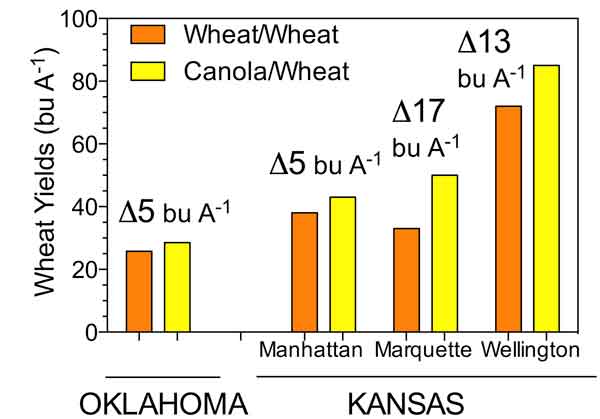 For southwest Kansas, greater than 50% winter survival was achieved when canola was planted mid-August to early September (3-yr average, 56-57%). Planting canola after the first week of September increased the likelihood of winterkill. For three years, planting canola on October 1 resulted in an average of 17% winter survival (Holman et al., 2011). 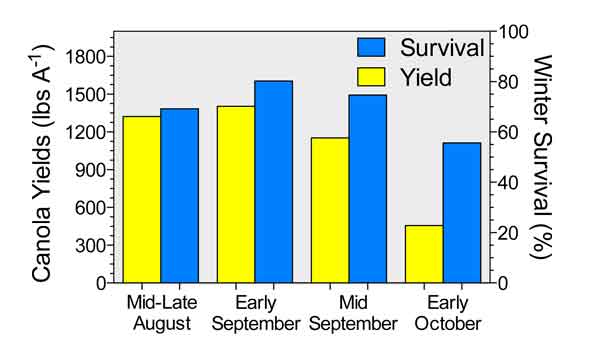 A 3-year analysis of tests investigating the effects of planting dates, genotypes, and tillage systems on canola yields documented a clear advantage in performing light tillage (disk) for improving grain yields and winter survival regardless of the planting date evaluated (Figure 3). The yield advantage of disk versus no-till (minimal disturbance) was greatest, in absolute terms, for early September as compared to mid-late August and mid-September planting dates. In relative terms, the importance of better residue distribution using a disk  in improving yields is greatest when the crop is planted outside of the optimum planting window (e.g. late October).

The yield advantage documented for minimum tillage is related to a better residue distribution, better stand establishment (plant uniformity as a critical point), increased fall vigor, and better winter survival. In addition, microclimate effects (colder temperatures around plants) and possibly residue allelopathy may affect yield under minimal disturbance no-tillage, lowering the maximum potential yield to be attained as compared with the minimum tillage with residue removed. 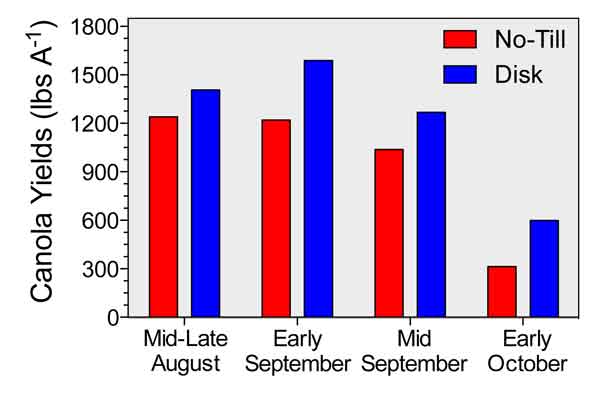 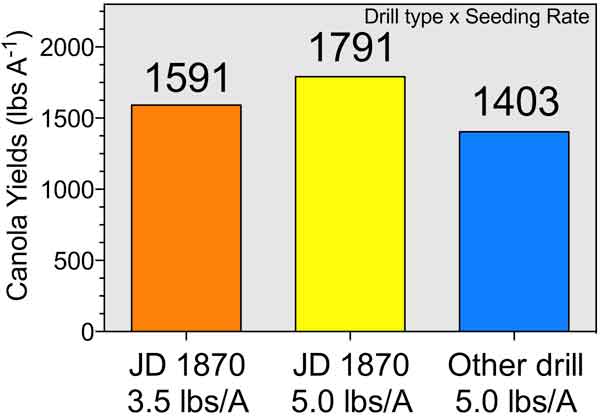 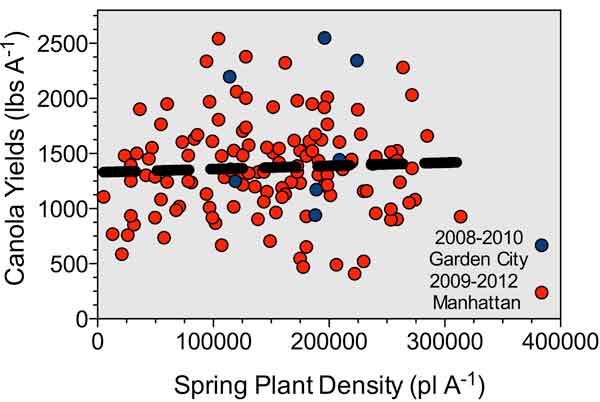 Cultivar selection is one of the most critical factors for producing winter canola. Cultivar selection greatly influences canola final yield. The most important traits to consider when selecting a cultivar are: yield, winter survival, herbicide resistance (sulfonylurea residual tolerance, Round Ready, or Clearfield), relative maturity, and oil content. A study performed during three growing seasons in Manhattan did not show any strong genotypic differences in response to tillage systems. Minimum tillage (disk) out-yielded no-till (with minimal disturbance) for all genotypes evaluated. In a simple comparison, four varieties are displayed in Figure 6 to depict the effect of the tillage systems. The hybrids Chrome and Sitro, in absolute terms, had greater yields when the planting system was minimum tillage (disk) as compared with no-till across three growing seasons (2009-10, 2010-11, and 2011-12). More information about cultivar and planting tillage systems is currently under investigation and will be available at the conclusion of the 2013-2014 growing season. 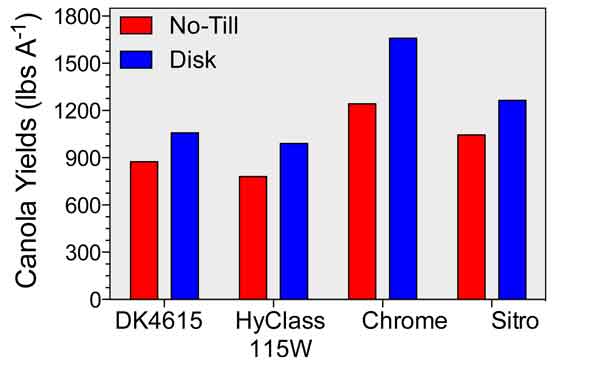 In summary, planting date and cultivar are two of the most important components for successful canola establishment, fall vigor, winter survival, and yield. A practical rule for planting date is to plant canola about a month ahead of normal winter wheat planting time. For insurance purposes, optimum planting date is between August 25 and September 25 for southwest Kansas, and September 1 to September 30 for central Kansas. For Barber, Harper, and Sumner counties, canola can be planted between September 10 and October 10. If canola is planted under no-till, plant a week or so earlier than the optimum date. For cultivar selection, the main traits to look for are yield, winter hardiness, relative maturity, and oil content.

It is critical to use planting equipment that can handle residue. Having less residue in-furrow increases the likelihood of winter survival. Residue between the seed rows does not appear to have a negative effect on winter survival or yield.

Tillage is recommended for distributing the previous crop’s residue, ensuring adequate winter survival, and maximizing canola yields, but it is not required if the seed row is clean of residue.

Plant density did not show any consistent trend across years, thus seeding rates around 3.5 to 5 lbs/acre seem to be reasonable for producing an adequate canola stand in narrow row spacing and using open pollinated varieties. Because of intra-row competition, seeding rates should be reduced to 1.5 to 3 lbs/acre in 30-in row spacing. More information on seeding rate and variety interactions will be available at the conclusion of the 2013-2014 growing season.