Eastern redcedar is an invasive coniferous tree found throughout much of Kansas. There are both male and female trees. Eastern redcedar has been commonly planted in shelterbelts. Birds undoubtedly eat the seeds and spread the plant along fence lines, under power lines, along roadsides, and in range and pasture land.

Figure 1. Redcedar invasion along I-70. Photos by Walt Fick, K-State Research and Extension.

Fall and early winter is a good time to start planning a control program for eastern redcedar on  range and pasture in Kansas. Eastern redcedar infests grasslands throughout the state. It can be especially common on rangeland or pasture that has not been burned for several years. If left uncontrolled, eastern redcedar can completely take over grasslands, intercepting rainfall and reducing forage production. The annual rate of redcedar invasion can be remarkable. The graph below, taken from an article by Owensby et al. 1973, shows the increase in density at two locations – one in Riley County and one in Pottawatomie County. 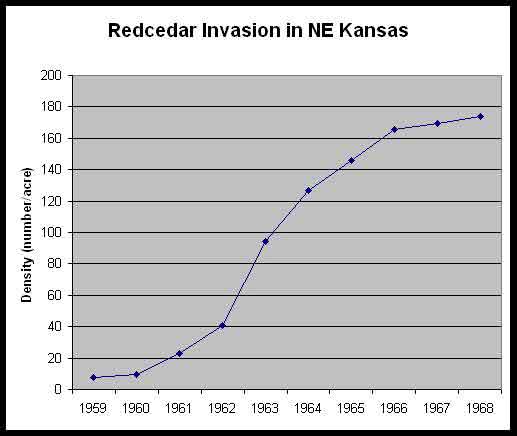 Eastern redcedar is a non-sprouting plant. It does not re-sprout from belowground plant parts like hedge or honey locust. This simplifies the control measures, in some ways. There are three principal methods of controlling eastern redcedar. In order of preference, the methods are:

Fire can kill or damage eastern redcedar if there is enough fuel to carry the fire. A normal fire will control redcedars that are less than three to four feet tall. Redcedar normally grows about 6-12 inches a year, so as long as grassland managers burn every 3 to 4 years, that should keep most or all of the redcedar under control. Fire may not kill the entire plant, but if at least two-thirds or three-fourths of the needles are scorched, the plants will eventually die. If only half or less of the needles are scorched, the plants will probably survive. The most difficult situations are when there is a thick stand of redcedar, or many of the plants are more than four feet tall. Under these conditions, fire will probably not be acceptably effective. Late summer rest should be used in grazing management to allow accumulation of enough fine fuel to ignite trees when the prescribed burn occurs. Smaller cedar trees can be cut and stacked under larger trees. They can serve as ladder fuels taking fire from the ground up into the canopy of larger trees. Burning can take place just about any time, but February-March might be ideal as trees are dry and seem to ignite easily. Timing of the prescribed burn depends on your objectives.

Redcedars can be killed outright if they are clipped off near ground level, below the first green branch. Where clipping or mowing hasn’t been effective, it’s because the plants were not cut low enough. Even clipping three inches off the ground may not be low enough in some cases. Managers should try to get as close to ground level as possible. Clipping may be the only way of controlling eastern redcedar that is more than four feet tall. Clipping is sometimes easier to do if the plants have first been burned – even if the plants survived the fire. If the fire was reasonably hot, it will almost always sear off many of the lower branches, which makes it easier to get to when operating a clipper, mower, or chainsaw. Eastern redcedar that is clipped off at ground level will not regrow or re-sprout. Redcedar can be controlled by clipping or mowing at any time of the year. 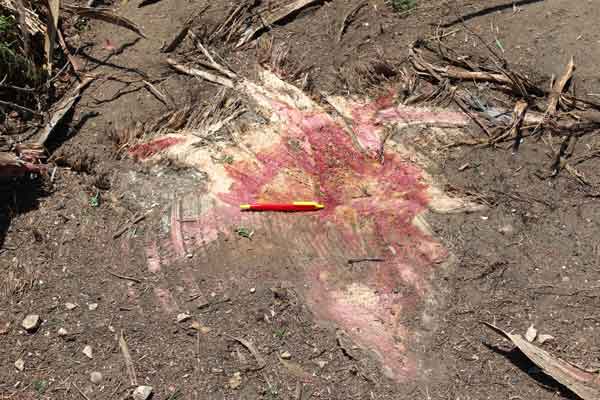 Figure 4. Eastern redcedar that is clipped off at ground level will not regrow or re-sprout.

If the stand of redcedar is too thick to get a good burn (or the manager simply doesn’t want to do a prescribed burn) and the plants aren’t too big, then chemical control is another alternative. One chemical for eastern redcedar control is picloram, which is contained in Tordon 22K and Surmount. Tordon 22K can be applied as a liquid directly to the soil right at the base of the plant. The label calls for three to four milliliters (cc’s), undiluted, per three feet of plant height. This should be applied in April/May or September/October, just prior to a rain if possible. It can also be applied as a foliar spray, in a one percent solution. Surmount is applied as a foliar spray to trees no more than three feet tall, at the rate of three to six pints per acre, in late spring or early summer. Tordon 22K and Surmount are restricted use pesticides.

Prescribed burning is the method of choice for most instances where eastern redcedar has invaded. Fire is a very effective tool for controlling smaller trees. Larger trees that may survive burning can be mechanically removed. Herbicides are available for treating redcedar, but usually require good spray coverage and will be more effective on smaller trees.