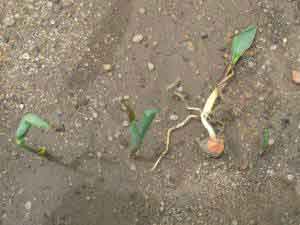 Nitrogen deficiency. This does not usually occur until a later stage of growth in conventional tillage systems. But in no-till corn, especially in high residue situations, N deficiency is common where producers haven’t applied nitrogen as a starter, or broadcast a significant amount of N prior to or at planting. In early planting in very cold soils where no N was applied close to the seed as a starter, seedlings may be N deficient in conventional-till also. Nitrogen deficient corn seedlings will be spindly, with pale yellow-green foliage. As the plants grow, the lower leaves will “fire,” with yellowing starting from the tip of the leaf and progressing back toward the stalk.