Like 2018, a very hot and mostly dry July followed by a very wet August has created a near perfect storm for stalk rot development, particularly Fusarium stalk rot. There have been several reports in recent weeks of Fusarium stalk developing in eastern Kansas fields and some growers in Marshall County were reporting some lodging well ahead of harvest. 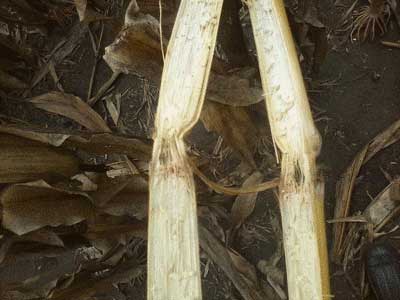 Carbohydrate depletion in the stalk during grain fill. Higher-yielding, “racehorse” hybrids tend to produce superior yields at the expense of late-season stalk integrity. These hybrids translocate a high percentage of carbohydrates from the stalks to the ears during grain fill. The latter is reflected with a substantial reduction in the stalk diameter from flowering until maturity (stem shrinking process). This weakens the lower stalk until eventually it will break over, possibly after becoming infected with a stalk rot disease. However, this does not mean producers should stay away from these hybrids. These hybrids have to be managed well. They should be harvested early, shortly after physiological maturity. This may mean harvesting the corn at about 20-25 percent grain moisture. Early harvest can result in discounts for high moisture, but it is better than leaving those hybrids in the field so long that stalks break.

Southern rust continues to arrive in Kansas earlier in the growing season, perhaps due to the overall warming trend in recent years (Figure 2). With the delays in planting this spring, southern rust has reached epidemic levels in numerous late planted fields in the eastern part of the state. While there is direct yield loss due to less green tissue being available for photosynthesis, there are also secondary losses from increased levels of stalk rot. 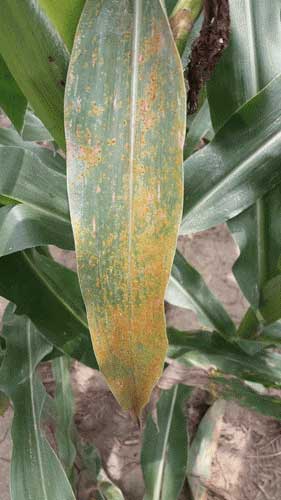 Gray leaf spot is the other important foliar disease in Kansas that can affect stalk rot (Figure 3). Gray leaf spot got off to a slow start in 2019, but then came on strong in fields with less resistant hybrids. Like last year, low corn prices made for difficult spray decisions and many fields went untreated where producers were trying to limit input costs. 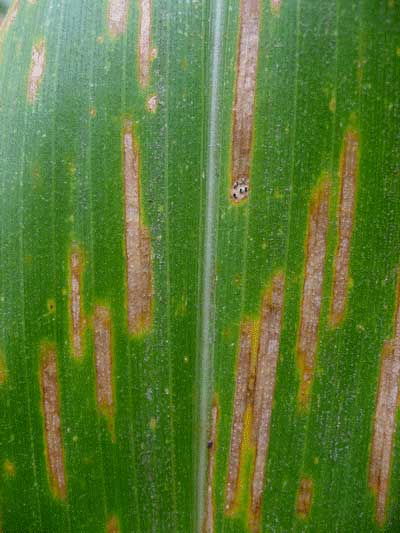 Nutrient imbalances and/or deficiencies. Nutrient imbalances and/or deficiencies predispose corn plants to stalk rot and stalk lodging. Both potassium and chloride deficiency have been shown to reduce stalk quality and strength, and stalk rot resistance. High nitrogen levels coupled with low potassium levels increase the amount of premature stalk death and create an ideal situation for stalk rot and lodging. Soil chloride levels should be maintained above 30 lbs per acre. 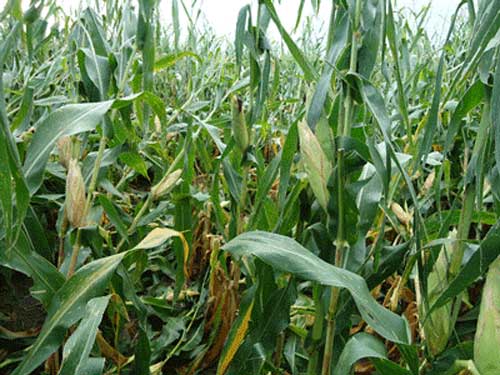