(Note: The following information is from the USDA Risk Management Agency. The fact sheet can be seen at: http://www.nrcs.usda.gov/Internet/FSE_DOCUMENTS/stelprdb1167871.pdf)

To ensure that USDA policies are coordinated and up to date with evolving cover crop practices, the administrators of the Natural Resources Conservation Service (NRCS), Risk Management Agency (RMA) and Farm Service Agency (FSA) organized an interagency workgroup to develop consistent, simple and flexible policy across the three agencies. National and local experts, along with multiple stakeholders, were involved in the process. Research literature, plant growth and soil hydrology models, and input from national/local experts in cover crop management provided the basis for developing cover crop termination guidelines to achieve their conservation benefits while minimizing risk of reducing yield to the following crop due to soil water use.

For Late Spring to Fall Seeded Crops - Terminate cover crops 35 days or earlier prior to planting the crop.

For Late Spring to Fall Seeded Crops - Terminate cover crops 15 days or earlier prior to planting the crop.

Terminate cover crop at or before planting the crop.

* For summer seeded or fall seeded crops terminate the cover crop at least 90 days prior to planting.

* For early spring seeded crops terminate the cover crop either in late fall or as early as possible in the spring prior to planting.

Terminate cover crop at or within 5 days after planting, but before crop emergence. 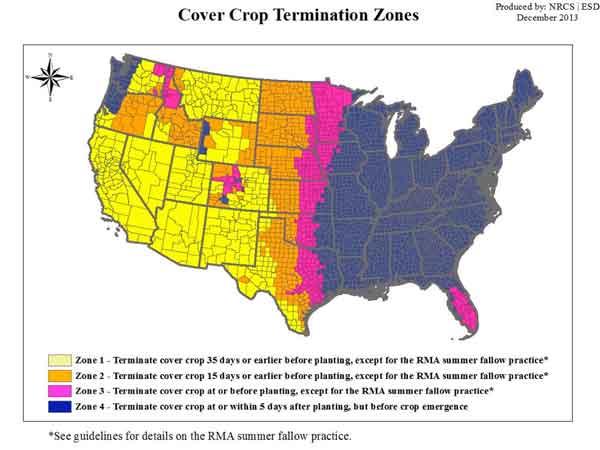 1. If the season is drier than normal nearing cover crop termination time, consider an earlier termination to conserve soil moisture.

2. If the spring season is wetter than normal at cover crop termination time, consider a later termination to use excess soil moisture and improve seedbed condition.

3. If the cover crop is part of a no-till system, termination can be delayed up to 7 days from the above termination period guideline, but terminated prior to crop emergence for all zones and systems.

4. In zones 1 and 2, fall seeded cover crops will have limited growth in the spring prior to “early” spring seeded crops (e.g., spring wheat, sugar beets, corn), and therefore the cover crop may be terminated at or just prior to planting.

5. Cover crop termination zones 1 and 2, in the largely mountainous regions in the Western U.S. (from Montana south to New Mexico and west to California), were refined by NRCS and other local university experts to identify proper cover crop management due to wide variability in climate and cropping systems in those areas.

7. New Technology - Where new technology has at least three years of satisfactory performance (achieves historical yield) based on farm records and the written approval of two “agricultural experts” as defined by RMA, the cover crop may be terminated closer to planting, if recommended by the experts.

8. Cover Crop Grazing or Forage Harvest – In all areas, except for the RMA summer fallow practice in Zones 1, 2 and 3, cover crops may be grazed or harvested as hay or silage as long as the planned amount of biomass is available at the time of termination to meet the conservation purpose. For the RMA designated summer fallow practice, cover crops should not be hayed or grazed. A cover crop harvested for grain or seed will not be considered to have been planted for conservation purposes, and will be considered a “crop”.

10. Short Season Cover Crops – There are specific cropping situations where the producer will plant the intended crop, plus a short term seasonal cover crop (NRCS Conservation Practice Code 340 – Cover Crop) prior to or at the same time as planting the main or insured crop. In this case the seasonal cover emerges first and provides short term wind erosion protection until the main crop becomes established crops are terminated by cultivation, frost /winterkill, or herbicides once the main crop is established. The seasonal covers used for the purpose of early crop establishment must be appropriate species for the area and the planned purpose.

12. Multiple Climates Within a County – Some counties may have multiple climate areas. In these situations, producers may request a different cover crop termination zone management or timeframe due to unique geographical and topographical features that reflect a different climate. Producers should contact either Extension or the local NRCS for management guidance. If the guidance includes practices other than indicated by the zones in this document, the producer must inform FSA and their crop insurance agent, as appropriate, and provide copies of the recommended management practice(s).

2. Interplanted – This involves multiple crop species grown together, with no distinct row pattern and does not permit separate agronomic maintenance or management. For RMA purposes, this means if a cover crop and cash crop are planted in a way that does not permit separate agronomic maintenance or management, then RMA will not insure the cash crop. This would also apply to cover crops if interplanted into the main crop and the cover crop interfered with the agronomic management and harvest of the main crop.

4. Double-Cropping – RMA and NRCS term: Harvesting at least 2 crops from the same land in the same year. This does not include cover crops.

5. Cover Crop - Crops including grasses, legumes and forbs for seasonal cover and other conservation purposes. A cover crop managed and terminated according to these guidelines is not considered a “crop”.

7. Late Planting Period – RMA term - The period of time following the date considered as the final planting date for an insured crop. The late planting period may vary from a week up to a few weeks.

8. Prevented Planting – RMA term - Failure to plant the insured crop by the final planting date designated in the Special Provisions for the insured crop in the county, or within any applicable late planting period, due to an insured cause of loss that is general to the surrounding area and that prevents other producers from planting acreage with similar characteristics.

9. Continuous Cropping – RMA Term – A practice of growing crops annually in a rainfall limited area (where summer fallow is also a practice).