Change in drought status in Kansas

Rainfall continued this week, although amounts were quite varied. Most of the moisture was the result of convective storms, which tended to pop-up and collapse over the same areas. Totals for the week range from 0.03 inches at Glasco in Cloud County to 4.16 inches at Belle Plaine in Sumner County. This has brought most of the state to above-normal precipitation for the month-to-date. The Southwestern Division had the greatest departure from average at 1.60 inches which is 208 percent of normal. Still, the rainfall wasn’t evenly distributed across the region. The Southwest Research-Extension Center in Garden City reported 3.33 inches, while Ulysses reported just 0.98 inches. In contrast, the North Central Division had the greatest shortfall from normal precipitation. The average precipitation for the division was just 0.32 inches, which is 36 percent of normal. 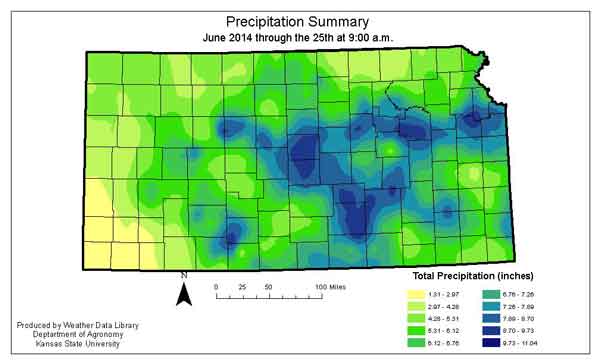 Temperatures were warmer this week, bringing the statewide average to 0.6 degrees above normal. The Northwest Division was the coolest when compared to normal, with an average temperature of 69.7 degrees F, or 0.4 degrees cooler than normal. The Northeastern Division was the warmest, when compared to normal. Temperatures there averaged with the average 73.2 degrees F, or 1.1 degrees warmer than normal.

This combination has resulted in only minor shifts in the U.S. Drought Monitor for Kansas. Much of western Kansas remains in extreme drought. There is also a pocket of extreme drought in Central Kansas. Given the rain that is occurring, that will improve in next week’s Monitor. While the rains have been welcome in western Kansas, it will will take a long period of continued normal to above-normal rainfall for major improvement in the drought situation. The Drought Outlook does call for continued improvement statewide.  This does not mean that the drought will be over, but does indicate the likelihood of at least 1 category improvement. For western Kansas, this would mean extreme drought might improve to severe drought. In northeast Kansas, the abnormally dry conditions might be replaced by drought-free conditions. 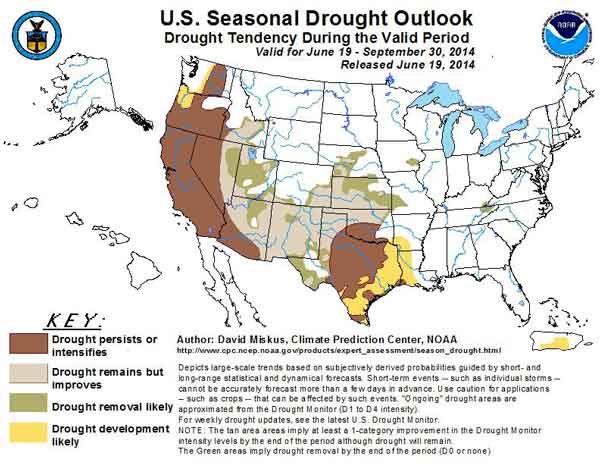