While drought has deepened across the Plains, persistent winds have also been an issue. Measuring the drought is difficult and measuring wind can be even more challenging. Wind is often hard to reasonably sample because small changes in terrain/obstacles significantly influence measurements. However, we can all agree it has FELT windy but how windy has it been?

Unsurprisingly, spring is the windiest season on the Great Plains. When warm air from the south begins pushing northward, clashing with colder air masses, it creates windy conditions due to increasing pressure differences. In addition, these winds are not uniform across the terrain. Western Kansas has fewer terrain changes and obstructions and typically averages more wind than areas farther east. April is the peak month for winds in all regions of the state despite (Figure 1). 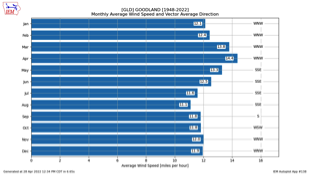 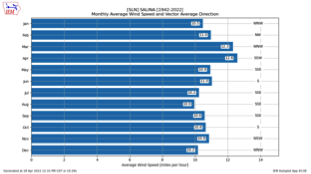 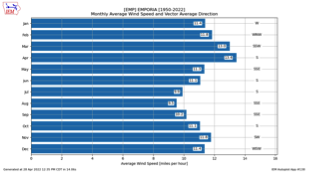 There are many ways to sample and observe wind, and then to calculate averages for specific locations and regions. There are few locations that have adequate climatology data to compare to normal. However, some airports have fairly reliable data and that was used in Figure 1. Using those same locations, let’s look at average sustained wind speeds over a period of time. This does not consider gusts, which are the daily maximum wind speeds (we will look at those next). Daily average sustained wind speed doesn’t consider just the afternoon readings (typically the windiest time of day) but also averages in the overnight speeds (typically the least windy time of day). Therefore, the final average wind speed may underplay the gusty afternoon winds that are moving much of the soil.

Goodland and other locations in western Kansas have been the target of the strongest winds observed this spring. In April, of the 27 days completed at the time of this writing, 17 days had at- or above-normal sustained winds (Figure 2). Farther east, Salina has measured 16 days of at/above-normal wind (Figure 3) and Emporia only 10 (Figure 4). From this information it is safe to say it has been windier than normal for over half the days in central/west Kansas. It has also been less windy farther east. Unfortunately, this doesn’t portray the magnitude of the strongest winds. 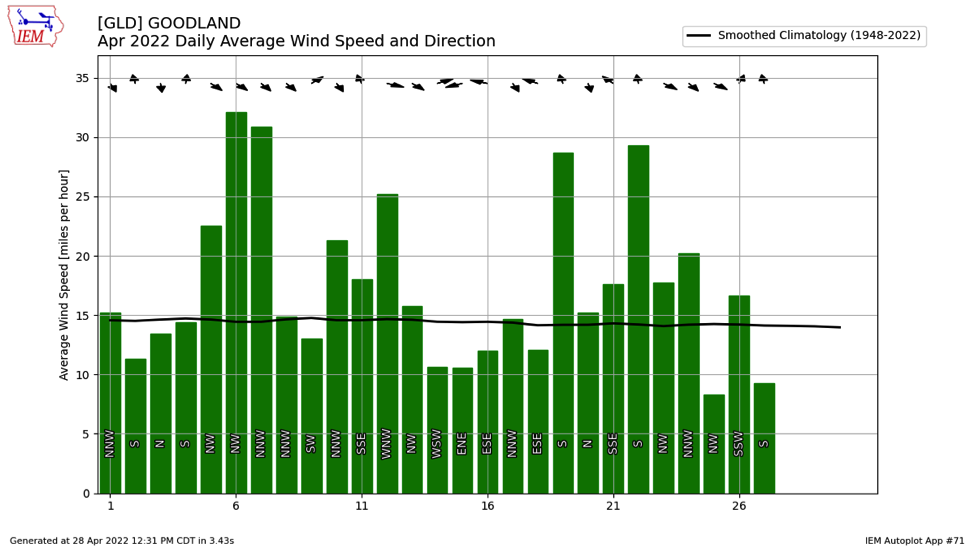 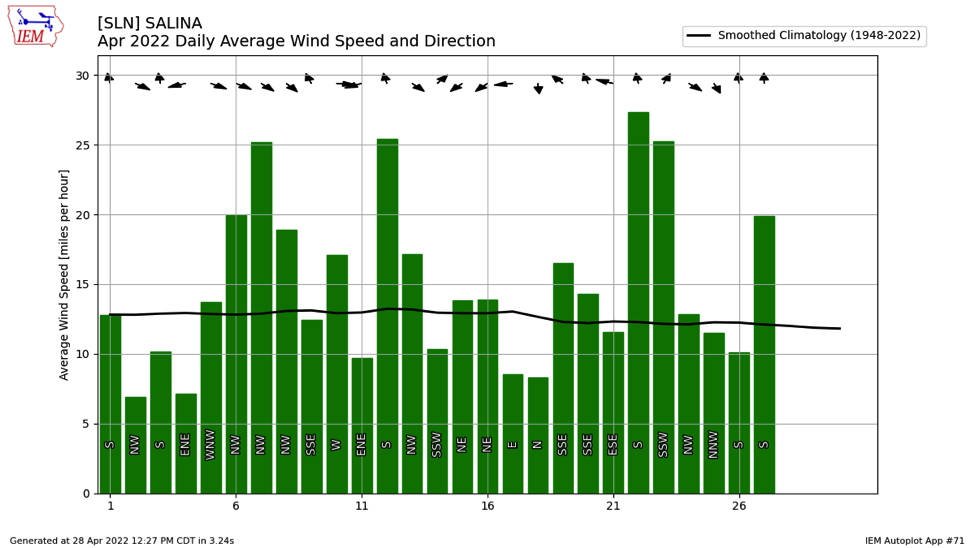 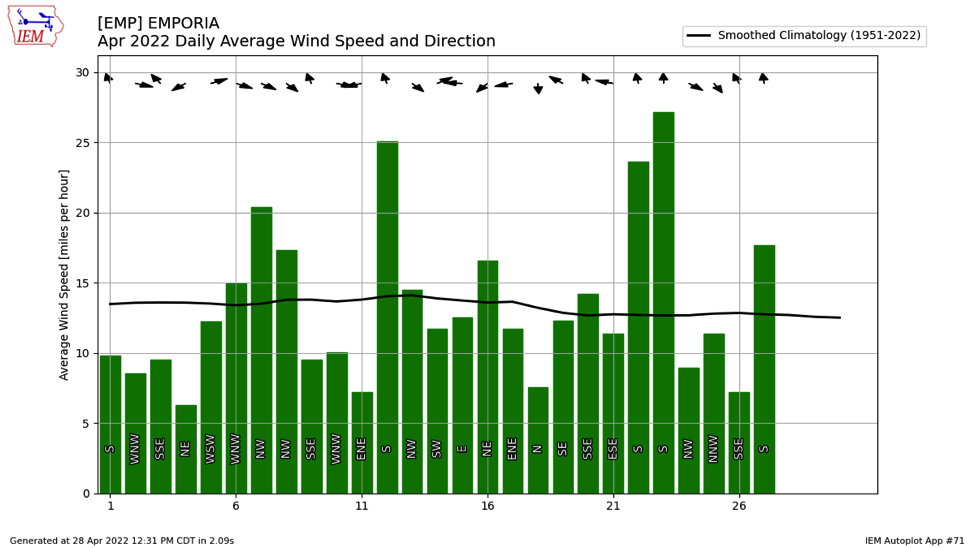 All About the Gusts

Gusts typically are measured as the fastest three- or five-second wind speeds measured through the day. Often these occur in the afternoon and get mixed out with averaging of sustained wind. Evaluating the Kansas Mesonet (mesonet.ksu.edu) wind data for the months of March through April, the average of the strongest gusts (at 30 feet, similar to the airport stations used above) for the period are above 20mph at all stations with maximum averages of 30-40 mph occurring in western Kansas (Figure 5). The maximum measured gusts reached as high as 73.9 mph at Colby on April 23rd. One third of the 57 tower stations in Kansas have measured gusts over 60mph since March 1st. This is the strong wind that many are referencing and are responsible for much of the blowing dust and wildfire concerns. 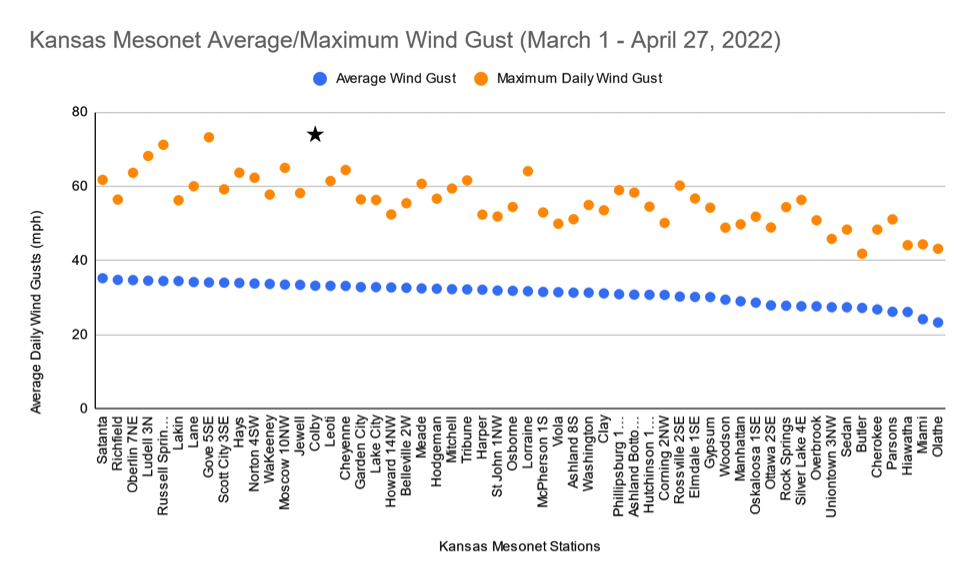 Figure 5. Average of daily wind gusts and the maximum wind gusts measured from March 1 through April 27, 2022 on the Kansas Mesonet. The strongest wind gust, 73.9 mph at Colby on April 23rd is starred. Source: Kansas Mesonet.

A popular question of late has been if there is a connection between drought and the winds across the region. This question is a bit hard to answer as many environmental connections of drought are hard to measure. The first most obvious connection has been with the persistent La Nina. This combined with other oscillations have contributed to persistent northwest flow of wind. While this has kept temperatures cooler and drier than normal (and led to drought), it has also provided frequent storm systems and associated cold fronts. Frequent cold frontal passages result in enhanced pressure gradients leading to our persistent gusty winds. It has also shunted chances of moisture off to our south and east.

So what about the drought? Drought is not just limited to Kansas. Much of the western U.S. is gripped in severe or worse drought, resulting in drier air masses. This drier air is moved over Kansas with westerly flow in the northern hemisphere. As a result, drier atmospheric air leads to fewer clouds in the sky and increased solar radiation. Using Salina as a center point in Kansas (Figure 6), observed only 19% of April afternoon (2pm) days have reported overcast conditions compared to the normal of 31% (approximately nine days). This is below average and has resulted in much more sun in the afternoon compared to normal.

Solar radiation in the afternoon means warmer surface soil temperatures. This in turn creates more mixing in the lower atmosphere, bringing stronger mid-level winds down to the surface and stronger surface winds!

Lastly, another possible local effect of the high winds may be the delayed green-up. Cooler temperatures and lack of moisture have quelled the initiation of tree budding, cool-season grass growth, and even wheat development. This has kept the surface of the earth across Kansas browner than normal. A darker surface absorbs more sunshine and heats up more effectively (especially with dry soils) than an active growing green surface. As a result, this warms the air more (relative to the surrounding air above it) and forces stronger mixing into the mid-levels of the atmosphere, bringing stronger winds to the surface.