The latest Crop Progress and Condition report from Kansas Agricultural Statistics, on October 11, stated that grain sorghum maturity was 88%, well ahead of last year (68%) and the average (75%). Harvest is well underway at 30% for this year, ahead of the 5-year average (20%).

The weather conditions experienced from early-September to early-October are critical for sorghum as related to the grain-filling rate and determining final grain weight. After a cold start to September, including freezing temperatures in the west, warmer temperatures have prevailed. The entire state has seen also seen much lower than normal precipitation. The greatest departures are in the east, where higher precipitation amounts are normal (Figure 1).

In recent years, a common question from producers is related to the dry down rate for sorghum when approaching the end of the season. Based on previous information, the average dry down rate depends on the weather, primarily temperature and moisture conditions – but data from modern hybrids is not available. The weather outlook for November calls for an increased chance of above-normal temperatures with chances for normal precipitation. Normal precipitation in November is much less than in October. This would favor a faster dry down rate than average but any sorghum impacted by freeze will present challenges in the dry down rate.

From a crop perspective, the overall cumulative GDD from flowering to maturity is about 800-1200 (based on 50 degrees F as the base temperature), with the shortest requirement in GDD for short-season hybrids. Before maturity, from beginning of grain filling (soft dough until maturity), grain moisture content within a grain will go from 80-90% to 25-35% where black layer is usually formed (Figure 2). From maturity (seen as a “black-layer” near the seed base; Figure 2) to harvest time, sorghum grain will dry down from about 35 to 20 percent moisture, but the final maximum dry mass accumulation and final nutrient content will have already been attained at maturity. 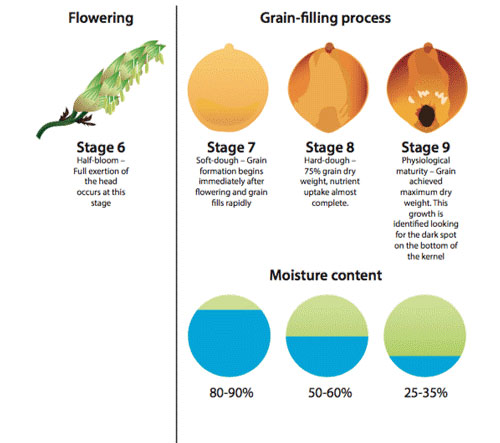 Grain water loss occurs at different rates but with two distinct phases: 1) before “black layer” or maturity (Figure 2), and 2) after black layer. For the first phase, the Figure 2 presents the changes in grain moisture from soft dough until physiological maturity of sorghum.

To answer the rate of dry down question from many of our producers, a study was conducted to investigate the effect of the grain dry down rate from the moment of “black layer” until commercial harvest grain moisture is reached. For the conditions experienced in 2019 (from early September until early October), the overall dry down rate was around 0.7% per day (from 34% to 17% grain moisture) – taking an overall of 26 days (from September 9 to October 10).

It is expected that the dry down rate will decrease to <0.5% per day for late-planted sorghum entering reproductive stages later in the growing season. A similar decrease is also expected for sorghum that was exposed to late-season stress conditions (e.g., drought, heat, and freeze). Under these conditions, maturity may be reached with high grain water content and the last stages after black layer formation could face lower temperatures and higher humidity. These main factors should be considered when the time comes to schedule harvest.

You can track temperature and humidity levels on the Kansas Mesonet web site at http://mesonet.k-state.edu/weather/historical/ by selecting the station and time period of interest.