April 2020 has come to an end without any tornadoes within Kansas, and a very low severe storms probability forecasted through early next week. That brings the question, “When did Kansas last see a late start to the tornado season?”. Turns out, you do not have to look back too far. In 2018, the first tornado of the season was recorded on May 1. That year was a relatively slow year for tornado activity, with just 48 reported over the year. A late start does not necessarily mean a calm season. Last year, the first tornado was recorded on April 17, and the annual total was 101. The earliest date for the first tornado was January 28, 2006, when three tornadoes were reported. The latest date for the first Kansas tornado occurred on May 26, 1967.

Though there have already been six tornado warnings issued in the state, none have had reported touchdowns. Annually, the severe weather season plateaus on June 10 with the highest probability for tornadoes, hail, and wind (Figure 1). This is based off a 30-year climatology ending on 2011. The peak for tornado probability occurs two weeks earlier on May 27 (Figure 2). 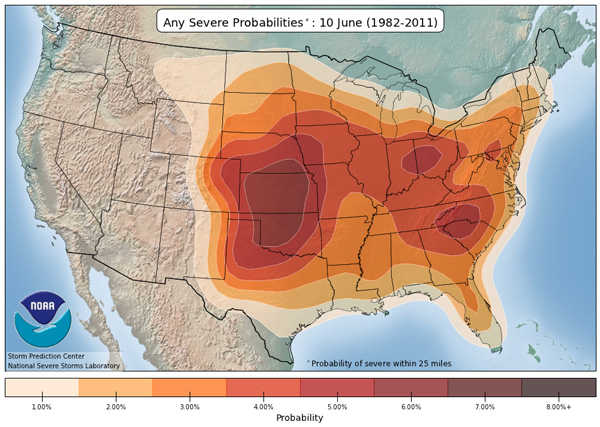 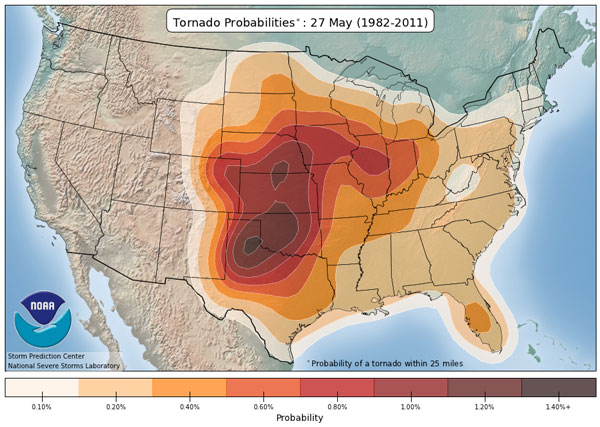 Thus far in 2020, the amount of tornadoes elsewhere across the United States is actually running above average (Figure 3). This activity is mostly focused in the south and southeast – especially on Easter. However, the medium term forecast shows little probability of significant outbreaks and the quick pace of rising annual tornado numbers is likely to slow down. 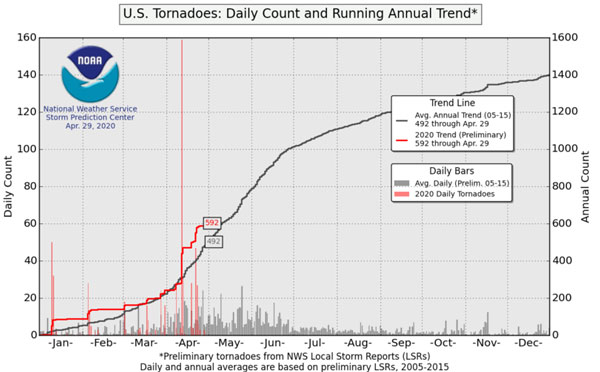 Despite the lack of tornadoes, April 2020 wasn’t without severe weather. There were several reports of hail swathes (Figure 4), where hail piled up to a depth of several inches, and covered several miles. Also, on April 11, hail up to baseball size (2.75”) was reported in Marion County. Preliminary totals from the Storm Prediction Center are 29 large hail events and 10 damaging wind events. 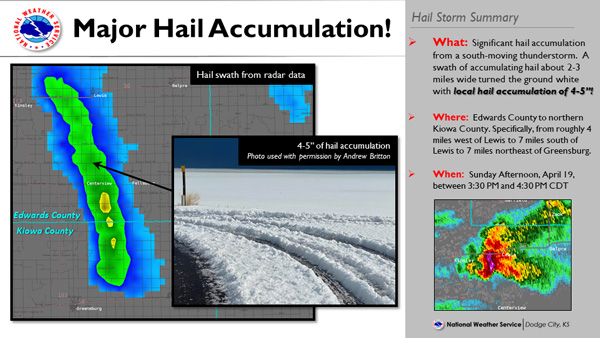 Always be prepared for severe weather

Although the forecast is for relatively quiet severe weather through the beginning of May, don’t become complacent. The severe weather season is just beginning across Kansas. Be weather aware, have multiple ways to obtain warnings, and always have a plan!

Here are some good websites for additional severe weather data in Kansas: