Marestail tend to be difficult to control even when the plants are small and in the rosette stage, but become even tougher when plants get more than 6 inches tall (Figure 1). That is why fall and early burndown treatments are critical to the long-term management of marestail. Unfortunately, that doesn’t always happen. In addition, some marestail have developed glyphosate resistance in many areas. However, some marestail populations are still susceptible to glyphosate, and even resistant plants are not completely immune to glyphosate.

If Liberty Link soybeans were planted, Liberty (glufosinate) also is fairly effective for marestail control, but requires higher spray volumes and good coverage for best results.  The addition of ammonium sulfate is essential to optimize Liberty performance.  It is important to remember that Liberty can only be applied post-emergence on Liberty Link soybeans.

The most effective herbicide treatment for controlling marestail in Roundup Ready soybeans is probably a tank-mix of glyphosate plus FirstRate. The combination of the two herbicides seems to work better than either herbicide alone, even on resistant plants. It is important to use the full labeled rates of glyphosate and recommended adjuvants, including ammonium sulfate, to optimize control and help minimize the risk of developing more resistance. Other tank-mixes to consider with glyphosate for controlling marestail would include Classic and Synchrony herbicides. Unfortunately, some marestail may also be ALS resistant, in which case FirstRate, Classic, and Synchrony would also be fairly ineffective. This just further emphasizes the importance of early spring weed control. 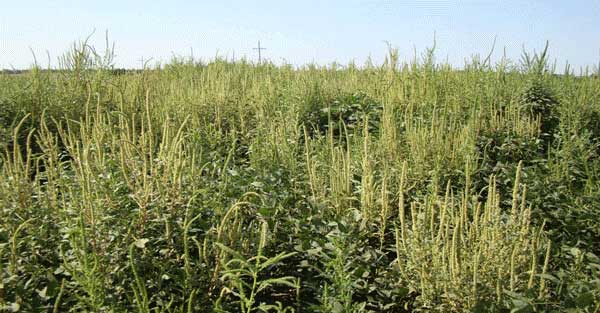 If pre-emergence herbicides weren’t applied or didn’t get activated in a timely manner, early-emerging waterhemp or Palmer amaranth may not have been controlled and can grow rapidly. Again, if Xtend soybeans were planted, the new dicamba products Xtendimax, Engenia, and FeXapan are an option to help control broadleaf weeds, including the pigweeds. However, just as with other post-emergence pigweed treatments, the pigweeds need to be less than 3 to 4 inches tall to achieve optimal control.

Likewise, Liberty herbicide can be used in Liberty Link soybeans to help control small pigweeds. Liberty is also most effective on smaller weeds and again, requires higher spray volumes to achieve good coverage and weed control. A sequential application of Liberty 7 to 10 days after the first application may be required for good control, especially on larger plants.

Flexstar, Cobra, Marvel, and Ultra Blazer can be fairly effective for controlling small pigweed, but are less effective as the pigweed gets larger, especially Palmer amaranth.  Some waterhemp and Palmer amaranth also may have developed resistance to this class of herbicides, but size still seems to be a factor, even on resistant populations.  These herbicides also provide some residual weed control, so tank-mixes of these herbicides with glyphosate should be applied within 3 weeks after planting to optimize performance in Roundup Ready soybeans. Producers may try to cut the rates of these herbicides to reduce soybean injury. However, lower rates of these burner herbicides still cause similar soybean burn symptoms and weed control is often reduced.

Pursuit and Harmony were once fairly effective for pigweed control and can still provide good control of susceptible populations, but many fields now have ALS-resistant waterhemp and Palmer amaranth.

Residual herbicides such as Zidua, Anthem Maxx, Outlook, Dual Magnum, and Warrant can also be added to any of the previously mentioned post-emergence herbicides to provide some extended residual control of pigweeds. This may be especially helpful if a good rate of residual herbicide was not used earlier or with heavy pigweed pressure.  Prefix and Warrant Ultra herbicides are premixes of Reflex and Group 15 herbicides than can provide both post-emergence control of small pigweeds along with extended residual control.