Rain during the last couple of months has caused sericea lespedeza to bloom in many areas.  If your area is still dry and sericea is not actively blooming, it may be more effective to wait until next year to spray.  The late-bud stage through the bloom stage is a good time to spray sericea lespedeza.  Dense stands of this invasive, noxious weed need to be addressed with broadcast or aerial applications of labeled herbicides to start reducing stands.  However, scattered or sparse stands can be treated with spot-spraying. 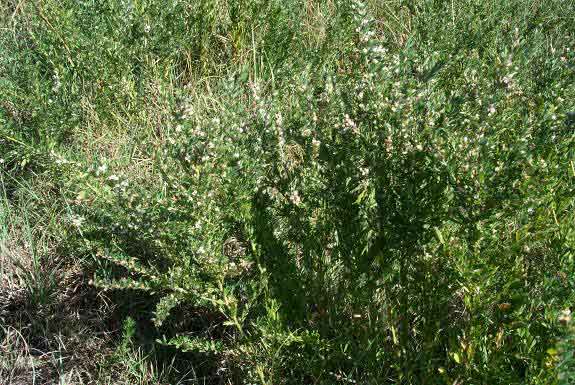 Remedy Ultra and PastureGard can be effective during the early to full bloom stage,  but products containing metsulfuron (such as Escort XP, Cimarron Plus, Chaparral etc.) are often more effective as flowering ends and seed pods appear and begin to fill.

Not all labels allow spot spraying.  Always check labels for recommended rates and other precautions.  For spot spraying, Escort XP can be applied at 1 gram/gallon of water or 1 oz/100 gallons of water.  Add a non-ionic surfactant.  Established stands of native grasses and smooth brome tolerate Escort XP, but tall fescue can be stunted.

Chaparral, a mixture of metsulfuron and aminopyralid, can be applied for sericea lespedeza control during the bud to flower stage at a rate of 2.5 oz/100 gallons of water.  Add 0.25% non-ionic surfactant to the Chaparral application.  Cool-season grasses such as smooth brome and tall fescue may be stunted by Chaparral.  Spot spraying results in spraying to the point of wetting at about 40-50 gallons/acre.

Sericea plants can be killed until frost, but if pod fill has begun, viable seed will still be produced. Grasslands with sericea lespedeza infestations should not be grazed or hayed after the sericea has gone to seed. This will only serve to spread the seed to other areas. If at all possible, keep sericea lespedeza from going to seed.