Producers should begin soon in planning their program for controlling kochia. The spread of glyphosate-resistant kochia populations throughout western Kansas, and the difficulty growers have had controlling these populations, suggest that perhaps control measure should begin prior to emergence of kochia.

The choice of herbicides for effective preemergence control of kochia in late February and early March will vary depending on subsequent cropping intentions. Various cropping scenarios are discussed below.

Note: All charts in this article are based on data from irrigated plots at the K-State Southwest Research-Extension Center at Tribune, and with populations of kochia that are susceptible to triazines. The kochia at this site is a mixed population of glyphosate-resistant and susceptible plants. 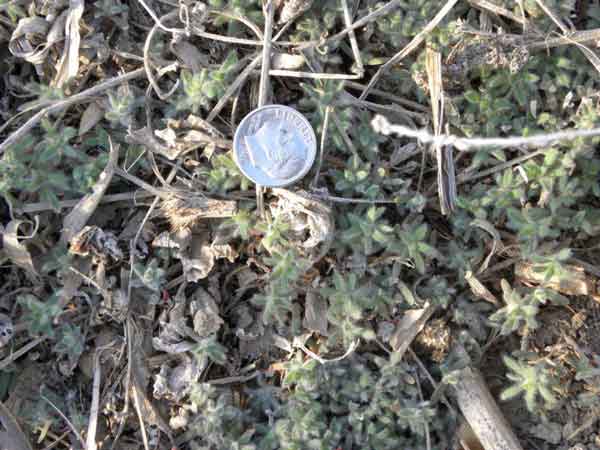 Fields going to corn or sorghum this spring

For fields that will be planted to corn and sorghum this spring, a combination of glyphosate (using a minimum of 0.75 lb ae/acre) with herbicides that have PRE and POST activity on kochia is most valuable. Tank mixing 8 to 16 oz of dicamba with or 1 to 2 pints of atrazine will control small kochia, and other existing broadleaf and grass weeds, and will provide extended preemergence control into May as shown in Figures 1 and 2. An application of Clarity alone, shown in Figure 1, suggests that a pint provides better control than 8 oz, however a combination of atrazine and Clarity is better than Clarity alone.

The best timing for this application is late February to the first week or two of March. The later it gets, the more likely it is there will be some small, emerged kochia, which increases the risk of failure. If producers wait until later to apply the burndown and preemergence herbicide in the same application, the kochia will be larger and most likely will not be controlled. If that occurs, the surviving plants will go on to cause problems throughout the growing season. 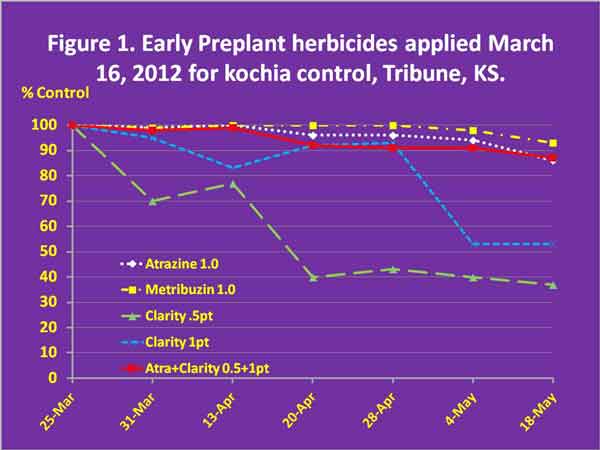 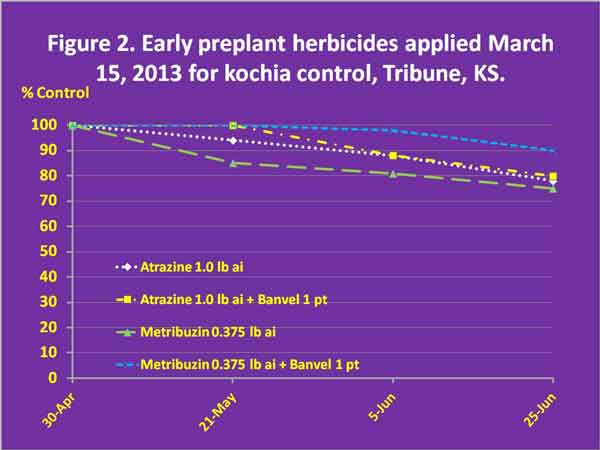 Other herbicides that could be tankmixed with the glyphosate ahead of corn or sorghum include Lexar EZ or Lumax EZ, or for corn only 3 to 4 fl oz of Corvus, Balance Flexx shown in Figures 3 and 4 or 1.5 to 2.5 oz of Scoparia herbicide. The addition of atrazine is key for most effective control with these herbicides. The addition of Banvel did not increase kochia control with Corvus+atrazine or Balance Flexx+atrazine in 2012, Figure 3. When marginal rainfall is received for the initial activation, Banvel, which is very soluble, is able to be activated and provide significant kochia control while atrazine and other herbicides may not be activated. This buys time for additional rainfall and full activation of all the herbicides. 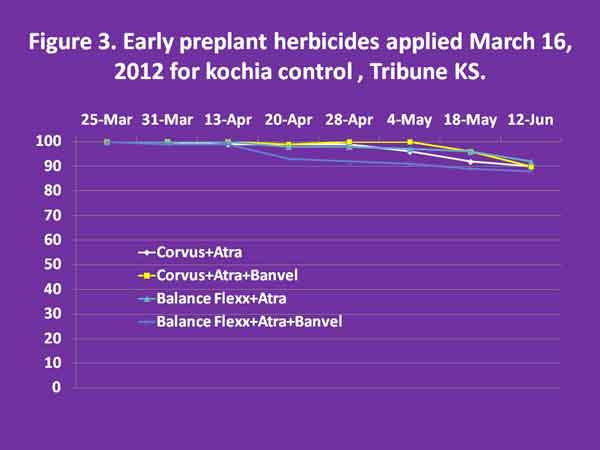 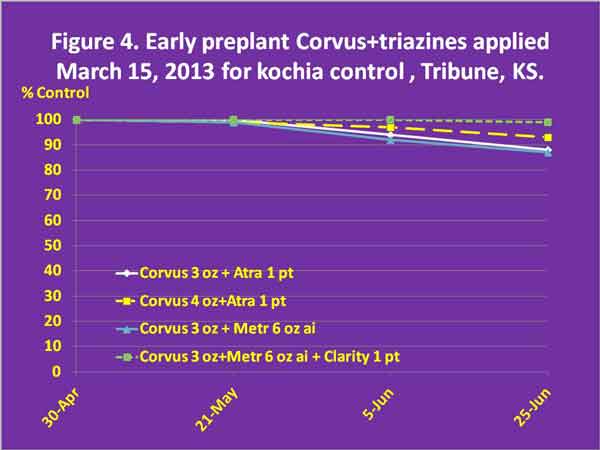 Fields going to sunflower this spring

Planting sunflower into a clean seedbed is a key step to getting good season-long control of all broadleaf and grassy weeds. But it is especially important for getting good control of any weed populations, such as kochia, that are resistant to glyphosate or ALS-inhibitor herbicides and cannot be controlled with POST applied herbicides in sunflower.

The best approach to kochia control in sunflower is to start in March with a tankmix of glyphosate (using a minimum of 0.75 lb ae/are) and Spartan (sulfentrazone), Spartan Charge (sulfentrazone+Aim), or Broadaxe (sulfentrazone+Dual Magnum) before kochia begin to germinate. The sulfentrazone will provide excellent preemergence control of kochia ahead of sunflower planting. Figures 5 indicates that 6 oz of Spartan controlled kochia very effectively in the Tribune experiments up to early June. It is very possible that as little as 4 oz could have done a similar job at the Tribune location because of the 7.8 pH and 1.8% organic matter soil. The label does not allow a March application of dicamba when intending to plant sunflower. Monitor fields closely as additional glyphosate or Gramoxone SL treatments maybe required prior to sunflower planting. Select preemergence products that are effective on kochia and apply at planting to extend control of kochia and other weeds. 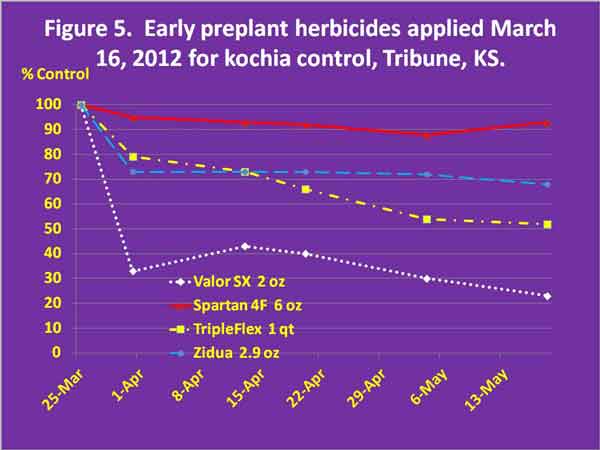 Fields going to soybeans this spring

The best management strategy for controlling kochia in soybeans is similar to the control strategy for sunflower, but there are more herbicide options in soybeans than in sunflower. Start in March with a tankmix of glyphosate (using a minimum of 0.75 lb ae/acre) and 8 to 16 oz/acre of Clarity. The use of Clarity requires a minimum accumulation of 1 inch of rain and then 28 days prior to planting soybeans. As indicated in the label, Clarity cannot be used as a preplant treatment in soybeans in areas with less than 25 inches of annual rainfall.

Gramoxone Inteon tankmixed with metribuzin (Dimetric, Metribuzin, Sencor) will control very small kochia and metribuzin will provide extended residual control of kochia, as long as the population of kochia is susceptible to triazine herbicides.

Figure 1 shows the effectiveness of a full pound of metribuzin. Figure 2 shows the effectiveness of 3/8 lb of metribuzin alone or with dicamba which  provided residual kochia control into May, especially when dicamba was added. Metribuzin can injure soybeans depending on soil texture, organic matter and soil pH, so be sure to follow label guidelines regarding soil characteristics and rate guidelines regarding use rate on soybeans.

Authority-based herbicides that contain sulfentrazone could be considered for use in March to manage an early flush of kochia. It’s important to note crop rotation restrictions on these products, however. The Valor-based products have not provided adequate control of kochia (see Figure 5). Other Authority-based products applied in March of 2013 did provide excellent control of kochia well into June (Figure 6). Also, Zidua has activity on kochia. It appears that more rain is required for activation of Zidua; however, once activated, no additional kochia emerged. For adequate kochia control with Zidua, using maximum labels rates for your soil type would be recommended.

Fields going to wheat this fall

If kochia is emerging in row crop stubble intended to be planted to wheat this fall, herbicide options exist that provide residual kochia control. Atrazine cannot be used in this situation, as this treatment is off-label. The following herbicides could provide effective residual control of kochia for fields to be planted to wheat this fall: dicamba, metribuzin or Dimetric (Dimetric label indicates ½ to 2/3 of a pound), Corvus, Balance Flexx, Scoparia (equal to Balance Pro), and Lumax EZ. These products allow wheat to be planted 4 months following application. Effectiveness of some of these herbicide treatments is shown in Figures 1, 2, 3, 4, 6, and 7.

These treatments can be effective when made prior to kochia emergence.  A November application of 1 lb of atrazine was effective through June 12, however, this treatment is labeled only if corn or sorghum will be planted the following year. The November application of Corvus was not adequate. The addition of metribuzin to Corvus would have improved kochia control. HPPD inhibitors should always be applied with a triazine. Only metribuzin, which is a triazine, can be applied in the late fall or early spring when wheat will be planted in the fall. February and March applications of Corvus and metribuzin were very similar and effective. This suggests that if weather cooperates and a window for application is available in February, getting these early treatments applied at that time could be beneficial. 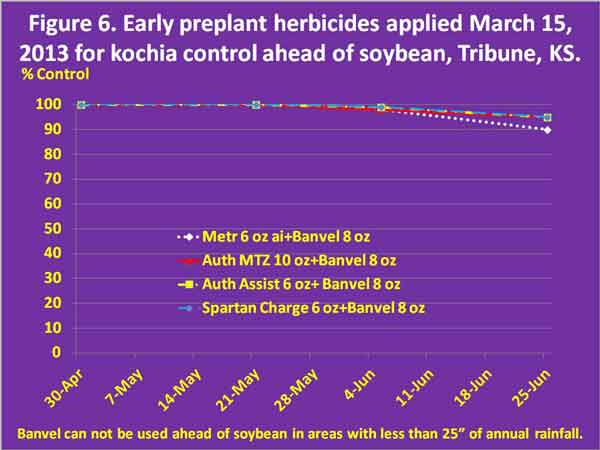 If kochia is emerging in a field of growing wheat, the options for control depend on whether the population of kochia is susceptible or resistant to ALS-inhibitor herbicides and whether wheat has reached the jointing stage. There are three big challenges to kochia control in wheat:

Additional products containing dicamba include Rave (Amber + dicamba) or Pulsar (Starane + dicamba). These products have to be applied before the jointing stage of wheat. Dicamba has some residual soil activity, but not as much as most sulfonylurea herbicides. Rave will have residual activity from the Amber, but since Amber is a sulfonylurea herbicide, it would not provide any residual control of kochia populations that are resistant to ALS-inhibitor herbicides. Both ingredients in Pulsar have limited residual activity.

As mentioned above, another option producers have for kochia control is Starane or other fluroxypyr products. Like dicamba, Starane is a growth regulator herbicide, but it can be applied up to the early boot stage of wheat. Starane also has limited residual activity, so good coverage is still important for control. Starane is weak on mustard control.

Huskie is also effective on kochia. It is a broad-spectrum herbicide effective on most broadleaf weeds in wheat, and can be applied up to the boot stage of wheat. Huskie also has limited residual activity, so producers will need to make sure kochia plants are thoroughly covered with Huskie to get the best control. Ideally, the Huskie should be timed for application after the majority of kochia has emerged, but before the wheat canopy affects good spray coverage.

Buctril can control kochia and can be applied at later stages of wheat development, but is a contact herbicide with no soil residual activity. Consequently, Buctril has the same kind of challenges as Starane and Huskie in terms of getting good coverage. Getting thorough coverage is even more critical with Buctril since it is a true contact herbicide and not translocated in plants. Buctril is effective on very small kochia only.