Hailstorms can severely damage soybean plants and stands. This brings up several questions: Can the soybeans recover? How much potential yield loss may have occurred? Is it worth replanting some fields? The answers depend on the severity of the damage and the stage of growth at the time of the damage.

Assessing the effect of hail on soybean is not a simple matter. The method of assessment depends on the stage of growth at the time of the hail and must incorporate estimates of node damage, leaf loss, and stand loss.

Damage to nodes and leaves: Soybeans can tolerate quite a bit of hail damage to nodes at early stages of growth. If the plants have a leaf or two remaining, or even just the cotyledon leaves, after a hailstorm, they can branch extensively from axillary buds and compensate quite well. In the vegetative stages, more than 50% of the nodes must be cut off or broken before resulting in a yield reduction of more than 10%. Put another way, even if up to half the nodes are cut off or broken, yield loss will be only 10% or less -- if the soybean has not flowered. Bruising is another factor to take into consideration, deep bruises can promote lodging issues. 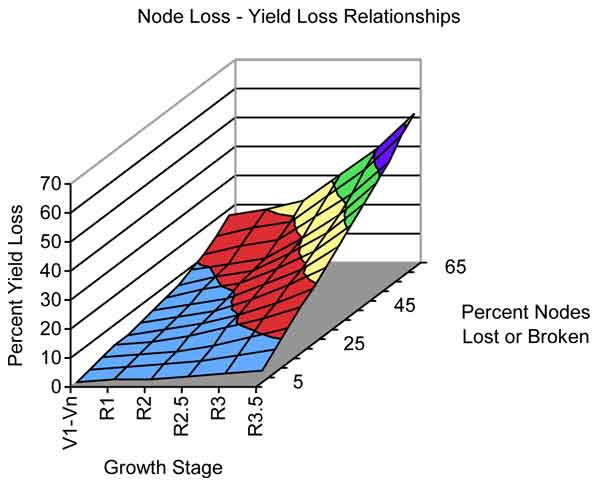 Pre-flower stand loss: If the hail was severe enough to break the stem below the cotyledons, the plant will die. In that case, producers need to evaluate the extent of stand loss to estimate the potential effect on yield. The yield loss will normally be less than 10% as long as the remaining population is above the range 60,000 to 90,000 plants per acre, depending on the yield environment. In medium to low yielding environments, 50,000 to 60,000 plants per acre often will maximize yield. In higher-yielding environments, 80,000 to 100,000 plants per acre can maximize yield. We'd like to have more plants than that, but often don't see much of a yield response to the higher populations, especially in stressful years. In general, a 50% stand reduction can be expected to result in a 20 to 25% yield loss.

As long as hail damage causes only 25 to 30% stand loss or less, it’s probably best to leave the stand alone and not replant. Of course, much depends on how the rest of the season plays out. In 2013, later-planted soybeans tended to outperform soybean fields that were planted earlier. 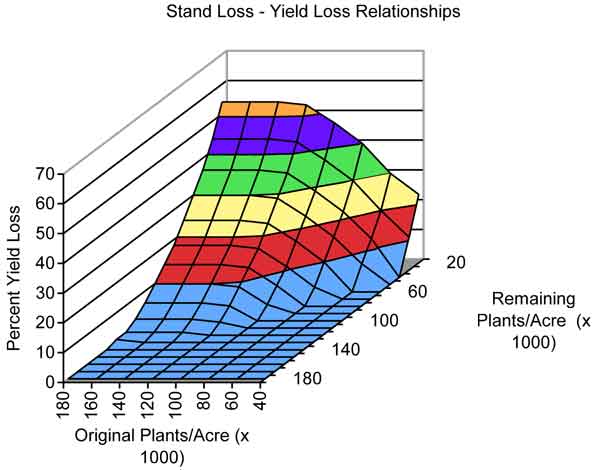 Damage to nodes and leaves: Indeterminate varieties will grow and flower over a 3 to 4 week period. As a result, soybean plants can recover fairly well from a hailstorm that causes significant loss of leaves, flowers, and early pods during the first 2 weeks or so of this period of flowering. Unless the weather is very hot and/or dry after the hailstorm, more flowers will form and set pods. If the hail occurs toward the end of that 4-week window a significant loss of flowers and pods from hail damage can dramatically reduce yields. For indeterminate varieties at any level of leaf loss, yield losses are maximized when damage occurs at R5, and are less at earlier and later stages. 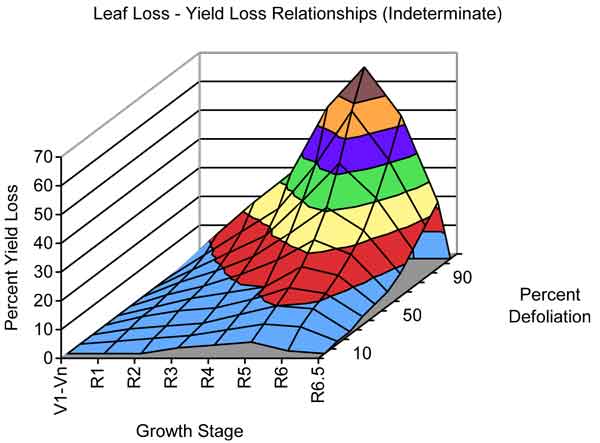 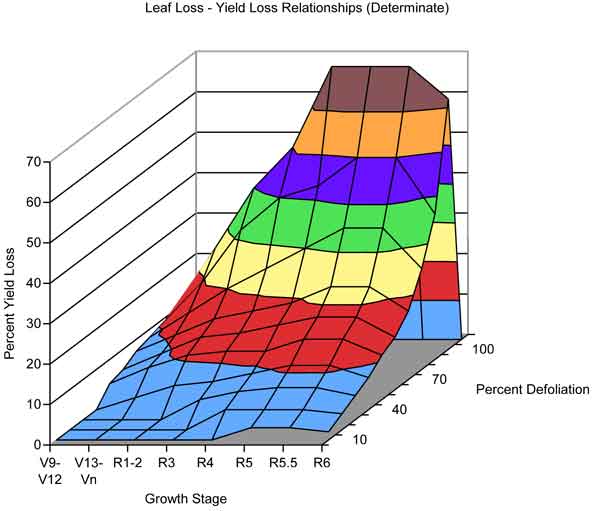 Stand loss: If hail breaks the stems of plants and causes plant death in the R1 to R6 reproductive stages of growth, the remaining plants will normally have only limited ability to branch out and compensate.

Plants cannot compensate through either additional flowering or new branch development after R6.5. Therefore, the way to estimate yields at these stages is to make a direct seed count. Hail damage to leaves at these stages will have little or no effect on seed development or yields unless the leaves are knocked off the plant.