Gardening on vacant lots in urban and suburban areas is becoming more and more popular. There are many benefits to this, provided some basic precautions are taken. Those who raise food on these soils would be well advised to have the soil tested for potentially harmful contaminants. If any contaminants are found, we must find ways to minimize any potential health concerns.

What are the potential contamination problems? Urban soils have sometimes been found to contain toxic levels of heavy metals including lead, arsenic, cadmium, mercury, zinc, nickel, and copper. Contamination may have come from paint, gas or oil, waste incineration, lead pipes, specific industries, and so forth.

It would be helpful to know what practices could be used to minimize potential health risks posed by contamination of garden produce on these soils.

To address this problem, in 2009 we studied lead uptake by several types of vegetables at an urban garden site in Kansas City with “average” levels of lead. In 2010, we tested at a different area on this same site known to have high levels of lead. Lead is one of the more common contamination problems on urban soils, and a contaminant that can cause serious health concerns if levels are too high. 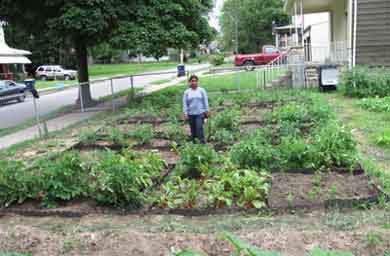 One of the most readily available organic amendments for urban gardeners is leaf compost. We tested the effect of compost as a soil treatment on the bioavailability of lead in this soil. Compost was added at 28 kg per square meter and mixed with the top 15 cm of soil, representing a compost:soil ratio of approximately 1:3 (v/v). Control plots with no compost were maintained. Soil pH in compost-added and no-compost-added soils was in the neutral range; furthermore, compost addition improved the concentration of soil organic carbon and cation exchange capacity.

In plants, lead tends to be held in roots. It transfers only slowly to shoots or fruits. As a result, root vegetables such as carrots or sweet potatoes could potentially have the highest concentrations of lead. Leafy vegetables, such as Swiss chard, are next. Fruits such as tomatoes are the least likely to contain lead absorbed from the soil.

To determine lead concentrations in the vegetables we tested, the edible portions of the plants were harvested as each plant type reached maturity at the end of the growing season. Also, representative soil samples were collected before adding compost, at planting, and at harvesting from each plot.

Our study found that adding compost at the rate we used diluted the overall lead concentration in the soil by anywhere from 29 to 52 percent. This reduced the amount of lead absorbed by the vegetables. Also, the phosphorus in compost (and iron oxides in some compost materials) can help hold lead in the soil, which reduces its availability to plants. Finally, compost increased the soil fertility and resulted in larger vegetables, diluting the concentration of lead in them.

This result indicates that an increase of total biomass of vegetables could be an effective means of reducing potential lead transfer to humans.

We tested the effect three methods of cleaning vegetables on lead concentrations in 2010.

Vegetables can be contaminated with lead not only because of absorption by roots, but also by surface contamination where lead-contaminated soil particles become attached to the plant surface or get embedded in the waxy outer layer of plants. The sodium lauryl sulfate used in the lab cleaning method is an anionic surfactant that can solubilize a large portion of the cuticle barrier on these plant parts. As a result, the lab cleaning methods may have effectively removed particles embedded in the plant surface by solubilizing the cutin lipid cover. That’s one reason the lab-cleaned tomatoes and Swiss chard showed lower lead concentrations.

Bioaccessibility of lead in soils

Ingestion of lead directly from contaminated soil and dust is considered as one of the major exposure pathways of lead for children. What percentage of the lead in soil and dust is “bioaccessible” -- meaning soluble in the simulated gastrointestinal (GI) environment and available for absorption by humans?

Urban and suburban soils should be tested often for nutrient and pH levels. Testing for micronutrients and heavy metals, such as lead, might also be advisable in any circumstance in which contamination may have occurred. One example is soil close to an older house where flakes of lead-based paint may have contaminated the soil.

If the soil test does indicate lead contamination, it might be a good idea to avoid growing root crops such as carrots in the garden. For leafy vegetables, remove the lower or outer leaves since they will be the leaves most likely to be contaminated with soil particles.

Be sure to wash vegetables thoroughly with high-quality water and soap. If soil particles are hard to wash off, peel the vegetables or remove the parts contaminated with soil.

In our study, lead concentrations of the edible portions of vegetables, except carrot, were below the maximum allowable limits of lead established by the Food and Agriculture Organization and the World Health Organization.