Plenty of corn acres have been planted in eastern Kansas over the past couple weeks. Many of the seedbeds were dry on the surface with good moisture at seeding depth. The hard freeze, with temperatures into the low-to mid 20’s, throughout Kansas overnight on April 14-15, has the potential to cause leaf burn and other kinds of damage to recently planted corn. Leaf burn is largely cosmetic, but other types of injury can be more significant.

Soil temperatures at the 4-inch depth during the first 24‐72 hours after seeding, when the kernels imbibe water and begin the germination process, are critical. Kernels naturally swell when hydrating. If the cell tissues of the kernel are too cold, they become less elastic and may rupture during the swelling process, resulting in “leaky” cells. Injury symptoms may include swollen kernels that fail to germinate or aborted growth of the radicle and/or coleoptile after germination has begun.

Chilling injury can also occur following germination as the seedlings enter the emergence process, reducing plant metabolism and vigor, potentially causing stunting or death of the seminal roots, deformed elongation (“corkscrewing”) of the mesocotyl, and either delayed or complete failure of emergence, often leafing out underground. Chilled seedlings may also be more sensitive to herbicides and seedling blights. 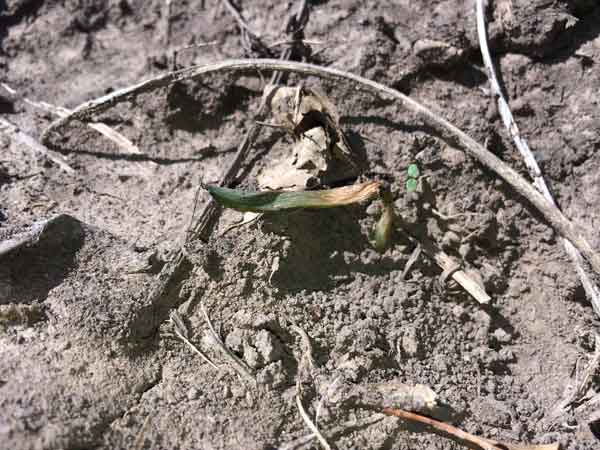 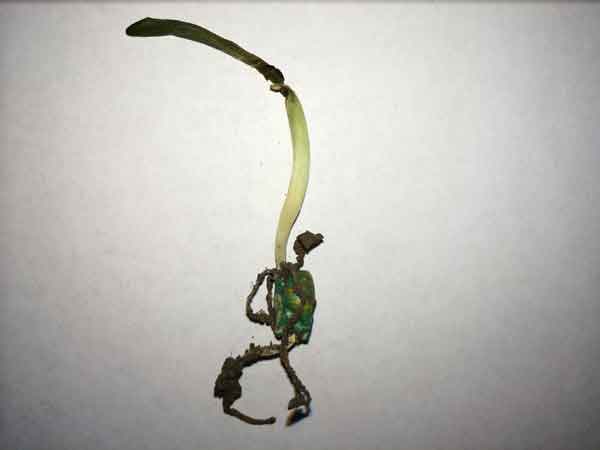 Figure 2. Leaf burn and brown lesion on the upper section of the mesocotyl from freeze damage early after corn emergence. Photo by Ignacio Ciampitti, K-State Research and Extension. 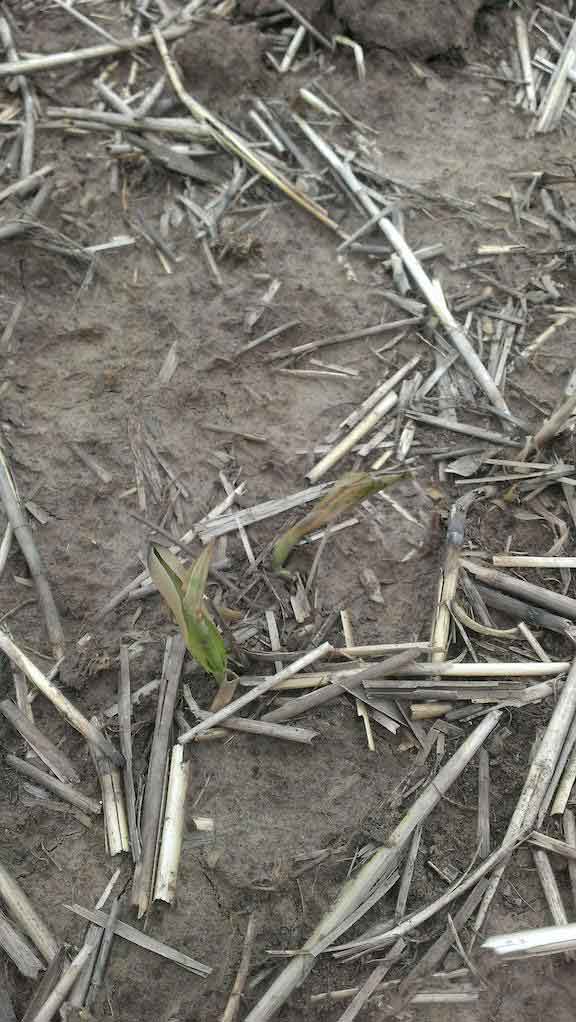 The damage to the corn plant can vary with:

- Residue: The effect of residue is not entirely straightforward. The more surface residue, the more the emerging seed and seedlings will be insulated and protected from temperature fluctuations. However, soils with less residue will warm up faster, resulting in less freeze injury when compared with no-till conditions where more residue is on surface.

- Growth stage: On newly planted corn, the emergence process could be affected. On newly emerged plants (before V4-V6), the first leaves could be burned but plants can recover as long as the growing point remains below the soil surface.

There was a significant amount of corn that was at the 2- to 3-leaf stage in southeast Kansas when the freeze occurred. Early indications are that most of the growing points are in good shape because the freeze didn’t reach very deep in the soil where the crown is forming. However some fields that were planted more shallowly (<1.5”) may have been more affected.

Before making any decisions, fields should be scouted 4 to 7 days after the cold weather occurred since the extent of the damage and potential for new growth will be evident during this time.

Early planted corn has the risk of facing cold injury, reducing yield potential. However, if growing conditions are good then a longer growing season and higher yield potential could also be expected from these early planting dates.