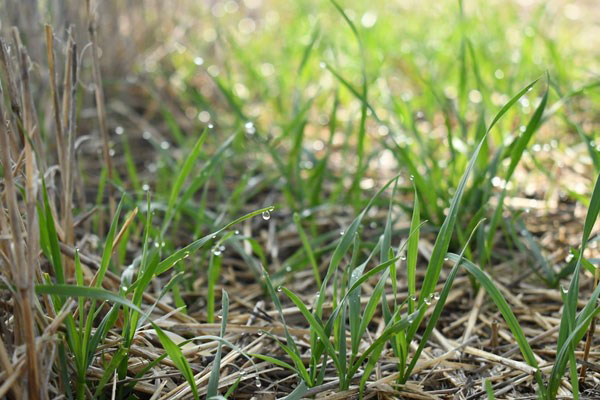 Wheat curl mites will move off growing wheat as the green tissue dries down and dies. After moving off the existing wheat at or near harvest time, the mites need to find green tissue of a suitable host soon or they will die (death of the whole population will take approximately 2 weeks).

Producers often like to wait several weeks after harvest before making their first herbicide application to control volunteer wheat. This allows as much volunteer as possible to emerge before spraying it or tilling it the first time. Glyphosate and atrazine are two herbicides that are often used for this purpose. Additional information about controlling volunteer wheat can be found in a recent eUpdate article: “Considerations for weed control following wheat harvest”. Often, a second application or tillage operation will be needed later in the summer to eliminate the green bridge to fall-planted wheat by making sure all volunteer is dead within ½ mile of wheat being planted in the fall. As we saw in 2021, wet weather through late summer often favors multiple flushes of volunteer wheat (Figure 2) and also favors the growth of other grassy weeds that can also support moderate populations of the curl mites and virus.

Management with genetic resistance: One tool in the toolbox

In addition, there are a handful of varieties with resistance to the wheat curl mite, including TAM 112, Byrd, Avery, Langin, Kivari AX, KS Western Star, Whistler, Canvas, Guardian, Crescent AX, Incline AX, Fortify SF, TAM 115, TAM 204, and T158. These varieties remain susceptible to the viral diseases, but they generally slow the development of the mite populations in the fall. This resistance can help reduce the risk of severe disease but will not provide enough protection if wheat is planted in close proximity to volunteer wheat or other hosts infested with large populations of the curl mites and virus. 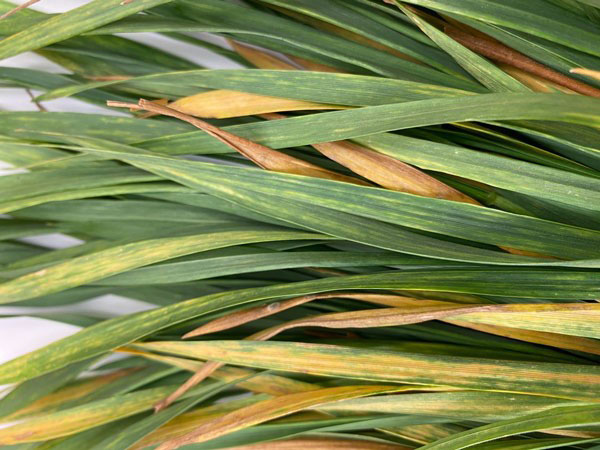 Volunteer wheat is not the only host of the wheat curl mite. Over the years, multiple research studies have evaluated the suitability of wild grasses as hosts for both the curl mite and the wheat streak virus. There is considerable range in the ability of a grassy weed species to host the mite and the virus. Barnyardgrass is among the more suitable hosts for both virus and mites, but fortunately it is not that common in wheat fields. In contrast, various foxtails, although rather poor hosts, could be important disease reservoirs simply because of their abundance. These grasses may play an important role in allowing the mites and virus to survive during the summer, months particularly in the absence of volunteer wheat.

If volunteer wheat and other hosts are not controlled throughout the summer and become infested with wheat curl mites, the mites will survive until fall and could infest newly planted wheat. Wheat curl mite infestations of wheat often lead to wheat streak mosaic infections (Figures 2 and 3).