Corn and soybean planting in U.S. Corn Belt and in Kansas is proceeding following one of the slowest rates ever recorded. For Kansas, corn planted progress moved from 79 to 96 percent in two-weeks from June 3 to 17 (USDA Kansas Crop Progress and Condition Report). Similar progress has been observed for Iowa, Nebraska, and Minnesota, however Ohio, South Dakota, Indiana, and Illinois are still behind (Figure 1, right panel). For soybeans, planted progress moved from 26 to 74 percent for Kansas. This is still well behind from 93 % from last year and 82 % for the 5-year average (Figure 1). Similar progress has occurred for Nebraska, Minnesota, and Iowa but there are large departures from planted progress for Ohio, South Dakota, Indiana, Illinois, and Missouri.

Saturated soil conditions impacted the expected number of suitable working days in a given period of time. Knowing how many suitable working days might be available to conduct fieldwork for a given crop operation impacts crop choice and machinery investment decisions. The most active planting dates for corn are usually between April 15 and May 15 (20th to 80th percentile, respectively) and for soybeans and grain sorghum planting time those dates are from May 15 to June 20 (20th to 80th percentile, respectively) (2010 USDA NASS handbook). 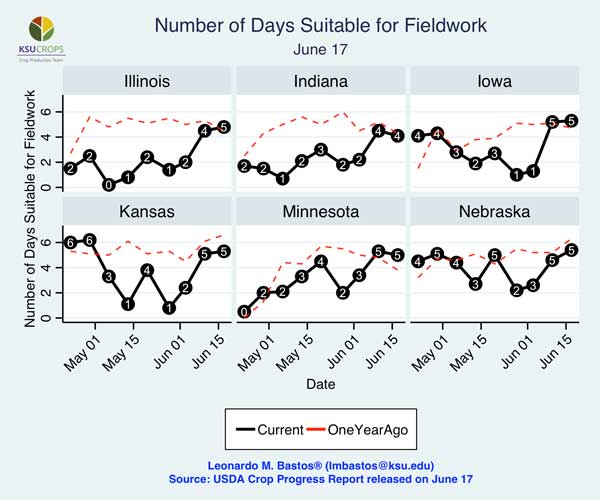 The days suitable for fieldwork approached 5 days available per week for the last two consecutive weeks, one of the highest numbers compared with the entire planting window this growing season. In parallel, the topsoil moisture conditions across many states is reflecting a reduction in the surplus category, with less fields presenting standing water. Still, the states presenting the largest delay in corn planted progress are also the ones documenting close to 30% of surplus of topsoil moisture conditions. For Kansas, the topsoil moisture condition, reflected as an average of the state-level cropland area, decreased over the last two weeks for the surplus category, reaching an overall value of 18% by June 17 (Figure 3). The latter reflects the drier weather conditions experienced in the last weeks, helping farmers catch up with planting new crop and re-planting some bad looking areas (poor stands, well below optimal plant population). 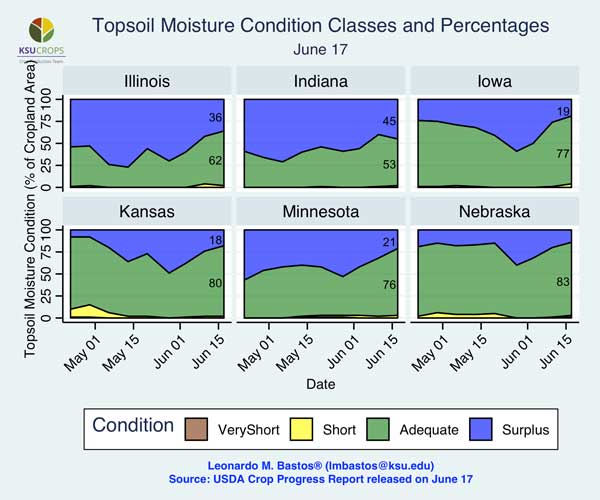 In summary, both corn and soybeans are catching up from their respective five-year and 2018 progress averages the last two weeks, with soybeans catching up and corn getting close to the final line. For Kansas, sorghum is currently at 55% planted progress, well behind the 84 % from 2018 and somewhat behind the five-year average of 71%.

Depending on your location, delayed planting will be a normal situation considering the weather already experienced during this spring. Considering crop insurance and the main agronomic practices to implant a successful crop will be critical factors guiding our planting decisions.