After a brief reprieve last week, heavy rains have returned to Kansas with a vengeance. Extensive flooding has resulted across the state, especially in central and eastern Kansas. These waters have created excessive water ponding, creeks/rivers to run high (Figure 1), and lake levels to rise - rapidly in some cases. In fact, many are currently at moderate-to-major flood stage (Figure 1). These high flows/levels created substantial disruptions to travel and recreation activities with costly damages.

The high stream flows are not good news for many of the lakes in Kansas. These rivers are discharging large amounts of water into these bodies of water and stressing the storage capacities of many reservoirs (Figure 2). 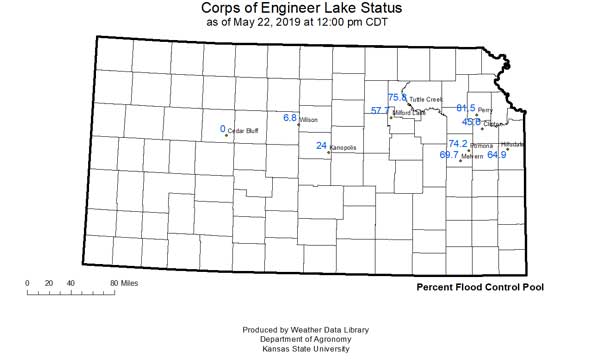 To make matters worse, rainfall is not able to infiltrate the soil and surface runoff is increasing. Due to above-average rainfall this spring, the surface soil is completely saturated and has remained so with continuing moisture (Figure 3). With May and June typically being the wettest months of the year, this does not bode well for reducing flood issues in the coming weeks.

Figure 3. Soil moisture for four depths at the Cherokee Mesonet station. Soils have been completely saturated since October 2018 (http://mesonet.ksu.edu/agriculture/soilmoist).

Unfortunately, rainfall forecasts in the medium range are not promising. The persistent pattern has consisted of a back and forth movement of a stationary front across the Central Plains. This front is separating cold, with below-normal temperatures to the north/west, and above-normal temperatures to the east/south. With the stagnant pattern, this has and will continue to allow periods of heavy rain/thunderstorms to persist along the front. Where the front sets up daily will be the focus for the heaviest flooding rains. Thus, the Climate Prediction Center has much of the state in chances of excessive rain (Figure 4). With nearly the entire region having seen too much moisture, resulting flooding issues are not expected to subside. It is almost a guarantee that water control issues will continue into June - if not worsen.

Below-normal temperatures are also anticipated to continue across the region due to not only the heavy rain, but the unseasonably cold air mass that will periodically surge across the state (Figure 4). This will not help efforts to dry up the regions’ soil. Cooler temperatures will result in less evaporation and evapotranspiration resulting in longer residence time of moisture. Cool weather and persistent moisture will also result in crop delays, additional disease control issues, and impeding field work.

As we move past June, temperatures will seasonably warm, coinciding with yearly average peaks. This usually brings a break in moisture and the corn really begins to grow. However, bearing some unforeseeable dry spell that defies meteorologists/climatologists alike, there will still be very persistent surface moisture across the region. When temperatures warm, evaporation/transpiration rates will increase as well. This will input more moisture than normal into the atmosphere and likely result in continued shower/thunderstorm activity into summer, likely more than normal. This additional moisture may offset the typical dry trends we see in the summer with a weak El Niño. Therefore, this increases the confidence in the outlook predicting near-to-above normal moisture throughout much of the summer.

Impacts of the outlook

Current stream and tributaries tend to ebb/flow directly with recent rainfall. The lakes/reservoirs/rivers typically take much longer to fluctuate. With the recent moisture, all of the above are running very, very full. Many reservoirs are not releasing to allow for extra river capacity in preparation of heavy rains. An unfortunately-placed heavy rain event could result in rapid river rise with attendant flooding.  Depending on the location, it could also force increased releases from a reservoir, with enhancement of flood issues downstream.

Another consideration will be the duration of flooding that will occur, especially along major rivers like the Neosho (Figure 5). After several rain events, these waterways tend to quickly fall back to normal. However, due to the duration of the heavy rains and the need for many reservoirs to release water in the future to return to normal pool, flooding will persist for quite some time. Even without more moisture, it is likely to take months before flows return to normal. Every rainfall we get in the process will push back that return, possibly substantially. 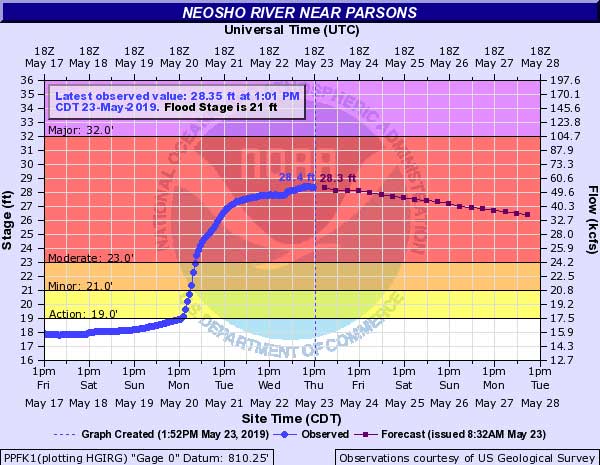 It will be a difficult time for many. There are numerous resources available to help. We have listed a few of them below.