In 2022, forage production was limited during the summer, and filling the gaps during the fall/winter will be a challenge. Small grain forages can be a profitable option for producers. They can be planted in the fall and either terminated or grazed out in the early spring, allowing time to plant a summer row crop if soil moisture is adequate.

Spring oats. Spring oats are usually planted in late February or March in Kansas. However, spring oats can also be planted in August or early September -- and if done so, they will produce much more fall forage compared to other small grain forages in the fall before a killing freeze. They will rarely produce grain if planted in August. Spring oats do not need to vernalize before heading. They will develop rapidly in the fall if they have enough moisture and fertility, and may even head out before termination by the first hard freeze in the mid-20 degree F range, but in most years it will not have time to produce viable grain. In very mild winters, however, much of the spring oats planted in the fall might survive the winter in southern Kansas.

Spring oats should be seeded at the rate of 2 to 3 bushels (64 to 96 pounds) per acre. About 30 to 70 pounds of nitrogen (N) per acre will be adequate depending on forage potential and if no excess N is available in the soil.

Oat pasture can generally carry 500 pounds of beef per acre. Average daily gains range from 1.5 to 2.5 pounds per head per day. Forage quality on actively growing oats is high, with protein content in the range of 20 to 25%.

Oats are fairly susceptible to atrazine, so if producers plan on planting oats this fall after corn or sorghum, there is a risk of herbicide carryover that can kill seedlings.

Winter wheat. Wheat is often used for grazing and grain in so-called “dual-purpose” systems (Figure 1). These systems are usually balanced between getting good forage and good grain yields without maximizing yields on either side. Dual-purpose wheat is typically planted at least two to three weeks earlier than wheat planted for grain only. In addition, producers wanting both grazing and grain should use a higher-than-normal seeding rate (90-120 pounds of seed per acre) and increase the N rate by 30 pounds per acre for every 1,000 pounds per acre of dry matter forage yield.

Producers who need more pasture than normal can plant even earlier, at the likely expense of lower grain yields. Planting very early opens wheat to many risks, such as wheat streak mosaic, barley yellow dwarf, Hessian fly, grasshopper damage, planting into hot soils (and consequent shortened coleoptile length), and common root rot. If beef prices are more favorable in the spring, wheat can also be grazed out, foregoing grain yield altogether. Wheat usually produces most of its forage in late fall and early winter, and again in the spring. There are differences among varieties in how much fall forage is produced. Grow an awnless variety if planning on grazing the wheat out.

Winter barley. There are new, improved varieties of winter barley available with better winterhardiness, especially under grazing. Many of the newer varieties also produce more forage than older varieties. Barley produces palatable growth rapidly in the fall under favorable conditions. It is considered supe­rior to other cereals for fall and early winter pasture, but wheat, triticale, and rye provide better late winter and spring grazing. Barley has excellent drought and heat tolerance. Winter barley forage is typically the most palatable of the small grain cereals and feed quality is the highest, although tonnage of barely is usually less than triticale or rye.

Winter rye. Rye establishes fall pasture quickly. It also regrows rapidly in late winter and early spring. However, rye becomes “stemmy” and unpal­atable earlier in the spring than other cereals. Since rye is less palatable and higher in fiber than wheat or barley, cattle gains during grazing are normally greater on oat, wheat, triticale, and barley pasture than on rye pasture. Rye is the hardiest of the small grain cereals for overall tolerance to drought, heat, winterkill, and poor soil conditions.

Winter triticale. Triticale, a cross between wheat and rye, possesses the toughness of rye along with the quality of wheat. It can be grazed much harder than wheat and still recover to produce grain. Triticale and rye can be planted about a month earlier than wheat with a decreased risk of wheat streak mosaic (while the triticale might not show symptoms of wheat streak mosaic virus infection, it may vector the mites that might affect a neighboring wheat field). However, there is still risk to grasshopper feeding in the fall, hessian fly, barley yellow dwarf, or root rot. Planting triticale (Figure 2) or rye earlier in the fall increases the amount of fall forage available compared to winter wheat. Triticale has longer effective spring grazing than rye, but not as long as wheat. Depending on the variety, winter triticale will head later than rye so the forage can remain higher in quality later into the spring. Heading date on all winter cereals should be a consideration if spring grazing is the goal. 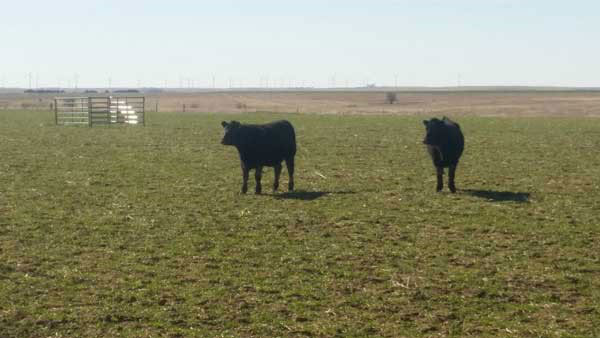 As planting dates get later in the fall, producers will get more fall forage production from triticale and rye. The later it gets; the more rye becomes the best option for fall forage needs. Relative pasture production of small grain cereals can be found at https://bookstore.ksre.ksu.edu/pubs/mf1072.pdf. It may help to identify the right forage to fill the gap in the system or complementary forages.

When planting a small grain cereal primarily for forage, use a seeding rate about 50-100 percent higher than if the crop were grown for grain. In western Kansas and under dry soil conditions, a seeding rate of 1.5 bushels per acre is recommended. In eastern Kansas or under irrigation, a seeding rate near 2 bushels per acre is recommended. When planting a small grain cereal for grazing purposes, increase N rates by about 30 to 50 pounds of N per acre. To determine the actual amount of additional N needed, the following formula can be used:

In a graze-out program, all the N may be applied in the fall. However, split applications will reduce the chances of having a problem with nitrate toxicity. In addition, there may be excess N in the fall from failed summer crops, so producers should use caution when putting on N without a profile N soil test.

Under good growing conditions, a well-fertilized small grain dryland pasture can carry about 500 pounds of cattle per acre. Under poor growing conditions, stock­ing rates should be reduced considerably. Cattle gains of 1.5 to 2.5 or more pounds per acre per day are possible dur­ing periods of good pasture production. Under irrigation, with intensive management, much higher stocking rates can be attained.

Fall grazing management is critical to the success of small grain pastures. Begin grazing when the plants are well rooted and tillered, usually about 6 to 8 weeks after planting. If the foliage is too tall when the animals are introduced, or if the crop is over­grazed, the plants will be more susceptible to winterkill. Make sure some green leaves remain below the grazing level. The minimum stubble height should be about 3 to 4 inches. Rye has a more upright growth pattern than most wheat varieties, so it should not be grazed as low. Winter barley is more susceptible to winterkill than rye or wheat. However, newer varieties of barley are exhibiting increased winter hardiness.

Overall forage quality of hay, barley is the highest, followed by oats, wheat, triticale, and rye. Yet, the forage quality of all small grains in the vegetative stage is more than sufficient for any grazing animal. During the fall and early spring periods of peak production, the crude protein content of small grain pasture is nor­mally about 20-25 percent. Growing cattle require about 12 percent crude protein, thus no protein supple­ments are necessary.

Small grain pastures can cause bloat. Daily supplementation with poloxalene (Bloat Guard) is highly effective in reducing bloat and is available in many different feeding forms. Feeding high-quality grass hay, silage, and/or an ionophore such as Rumensin or Bovatec can also provide some protection against bloat. Rumensin and Bovatec have also been shown to increase stocker cattle weight gains on wheat pasture.

Cows with high milk production grazing small grain pasture in the spring can experience grass tetany. To prevent this, provide a mineral supple­ment containing magnesium. Cattle should be started on the mineral two weeks prior to the risk of grass tetany.