In Kansas, salt-affected soils and related problems occur statewide but often on small areas. Field-wide problems often are due to poor quality irrigation water and/or excessive manure applications. Some areas of the state where salt mining occurs have soils naturally high in sodium and soluble salts. Drilling activity causing high-salt water to escape to the soil surface, spills, or natural causes may result in spotty problems. Landowners with questions or concerns about brine spills that may have occurred on land leased for oil and gas leases should contact their appropriate Kansas Corporation Commission district office (http://www.kcc.state.ks.us/contact.htm).

Ions most commonly associated with soil salinity include:

Salt-affected soils have been called white alkali, black alkali, gumbo, slick spots and other descriptive names. These names are associated with soil appearances caused by salt accumulation. The term alkali often refers to soils light in color and prone to surface crusting and implies that affected soils are high in exchangeable sodium (Figure 1).

Figure 1. Soil surface sealing from an accumulation of salts and sodium which leads to an increase in runoff and reduced water infiltration (left photo). Plants often show drought-related injuries due to a lack of available soil moisture with poor water infiltration as well as osmotic effect on plant water uptake due to high salt content in the soil (right photo). Photos by Dorivar Ruiz Diaz, K-State Research and Extension. 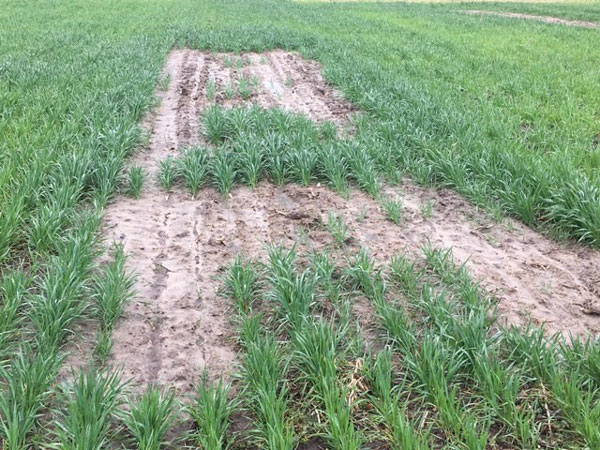 Characterization of saline and sodic soils

Salt-affected soils are divided into three groups depending on the amounts and kinds of salts present. Electrical conductivity (EC), is the ability of a soil solution to carry electrical current, and salts increase this ability. Classification depends on total soluble salts (measured by electrical conductivity), soil pH, and exchangeable sodium percentage (Table 1).

Saline soils - All soils contain some water-soluble salts, but when these salts occur in amounts that are harmful to germination of seeds and plant growth, they are called saline. Saline soils are the easiest of the salt-affected soils to reclaim if good quality water is available and the site is well drained. Saline soils often are in normal physical condition with good structure and permeability. They are characterized by irregular plant growth and salty white crusts on the soil surface. These salts are mostly sulfates and/or chlorides of calcium and magnesium.

Sodic soils - Sodic soils are low in total salts but high in exchangeable sodium percentage, abbreviated ESP. The combination of high levels of sodium and low total salts tends to disperse soil particles, making sodic soils of poor tilth. Sodium causes soil clays to swell and that squeezes out soil pores (which is useful when trying to seal the bottom of a pond or wastewater lagoon). Sodic soils are sticky when wet, nearly impermeable to water and have a slick look. As they dry, they become hard, cloddy and crusty.

Sodic soils are detrimental to growth of most plants. They can be reclaimed, but it may be slow and expensive due to the lack of a stable soil structure and low porosity, which slows water drainage.

Saline-Sodic Soils - These soils contain large amounts of total soluble salts and greater than 15 percent exchangeable sodium. The pH is generally less than 8.5. Physical properties of these soils are good as long as an excess of soluble salts is present. In other words, even though there is high sodium which normally causes the clays to swell, the calcium and magnesium in the soil helps keeps the soil pores open—so another way to put it is that the calcium and magnesium helps to counteract the sodium.

A companion  article in this eUpdate discusses the use of soil testing to identify saline and sodic soils, along with management recommendations.