The cold temperatures experienced in week of April 13-17 caused freeze injury to the 2020 wheat crop at varying degrees. The level of freeze damage depends on the region in the state, primarily because the wheat in different regions was at distinct growth stages (with varying levels of susceptibility to cold damage) and also because the different regions recorded minimum temperatures ranging from 8 to over 30 degrees F. Within a given region, factors that impacted the level of freeze damage included cropping system (which affected residue cover and sowing date), wheat variety selection, and position in the landscape. 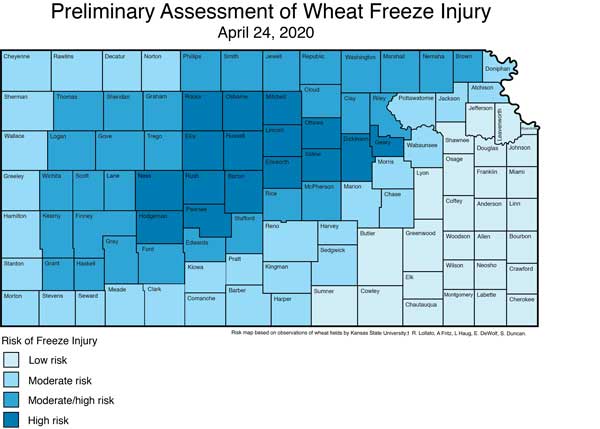 Figure 1. Preliminary assessment of the freeze damage resulting from the cold temperatures that occurred April 13-17. The risk is based on observations of fields and information provided by wheat growers. Conditions vary significantly among fields and are influenced by cropping system, wheat variety, and position in the landscape. Map created by Erick DeWolf, K-State Research and Extension.

The region encompassing Republic, Smith, Phillips, and Rooks counties showed a varying, but considerable, amount of freeze damage to the wheat crop. In general, the damage was more apparent in the western portion of this region; although some fields in Republic county also showed considerable damage. Fields that were planted at the optimum time such as those after a long fallow period were showing less leaf damage, but a large number of primary heads destroyed by the freeze (Figure 2). Many times, as many as 40 to 60% of the primary heads were lost. While secondary heads were mostly still alive, the crop needs moisture soon to help with recovery potential. In this region, freeze damage was accentuated by dry topsoil conditions, which currently gives the plants a desiccated appearance and very light weight. For those fields that were sown late, usually after a soybean crop in this region, the combination of freeze and dry topsoil caused considerable dry back of leaves and tillers, with as many as half or two thirds of the tillers killed by the freeze event (Figure 3). 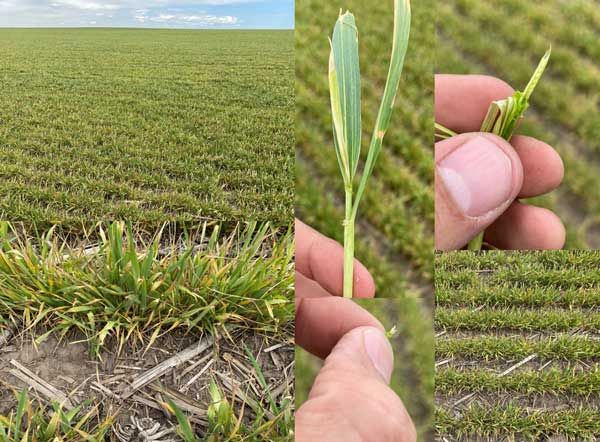 Figure 2. Wheat field sown at the optimum time, likely after a fallow period, in north central Kansas. These fields usually showed some level of leaf burn, and a considerable amount of tiller loss, evidenced by new leaves coming out of the whorl already discolored and mushy/brownish heads. Some primary tillers were not damaged, such as shown on the upper right corner. Photos by Romulo Lollato, Extension Wheat and Forage Specialist with Kansas State University. 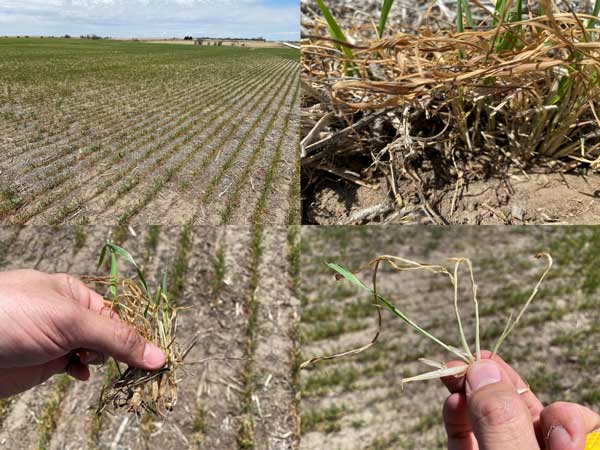 Fields in the region between Saline and Ellis counties showed, again, varying degrees of freeze damage, with at least the same but potentially more freeze damage than in the north central region. The trends observed in the north central region were also true for this region (primary tiller loss in early sown fields, severe leaf and tiller damage to late-sown fields, Figure 4). However, because the wheat crop was further along in development in this region, it was at a greater risk for freeze damage. This region had slightly more soil moisture, which should help the crop compensate for the potential yield loss through secondary tillers.

Figure 4. Leaf burn symptoms to wheat sown after wheat in Ellis Co, KS (left and center panels). About 40-60% of the heads were showing damage as depicted in the right panel. Favorable soil moisture conditions can help wheat recover and produce yield from the secondary tillers and remaining primary tillers. Photos by Romulo Lollato, Extension Wheat and Forage Specialist with Kansas State University.

As we moved from Saline County to McPherson and Reno counties, there were fewer fields showing leaf burn symptoms, so that there was essentially no sign of freeze damage in Sumner Co. Evaluation of the wheat heads near Hutchinson suggested that maybe 5-10% of the primary tillers could have suffered some damage level, especially in the early-sow fields (Figure 5). While there is still potential that the emerging heads might be trapped in the boot, the freeze damage in this region was much less dramatic than in the central or north central regions. 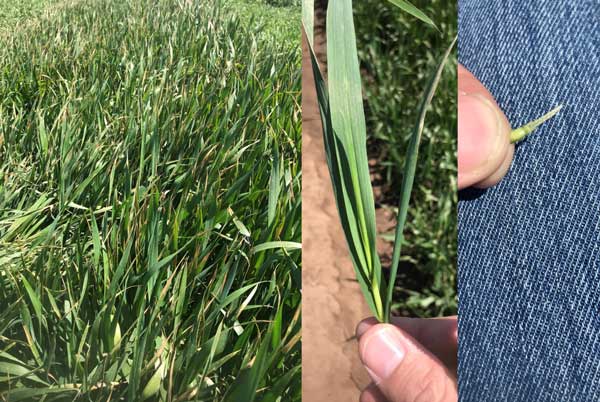 Figure 5. Leaf burn symptoms to the wheat in Reno Co, KS, but emerging leaf and head still healthy. There is potential for head trapping in the boot, but yield losses would likely be limited. Photos by Romulo Lollato, Extension Wheat and Forage Specialist with Kansas State University.

The wheat crop in the northwestern portion of Kansas was also affected by the freeze temperatures. The wheat crop was not as far along development relative to other areas of the state, with many fields tillering and early jointing stages of growth at the time of the cold temperatures. This area of the state experienced that coldest temperatures (often less 15 degrees) and dry soil conditions predisposed plants to injury. Overall, the damage was less severe in the Northwestern region than in central KS but some areas in Thomas, Gove and Trego Counties likely experienced significant damage (Figure 6). In many cases, the severely damaged fields turned yellow and eventually brown as the tissue declined and desiccated this week. The wheat in these fields will likely produce new tillers to compensate for potential yield loss, but rain is needed to help the crop recover. 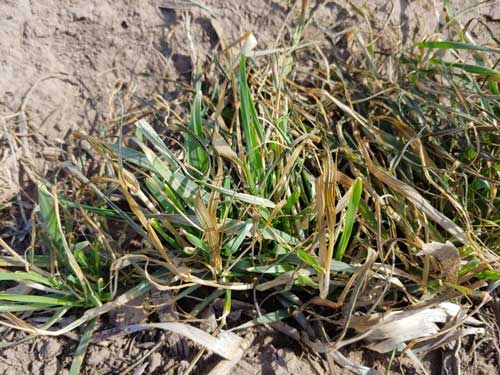 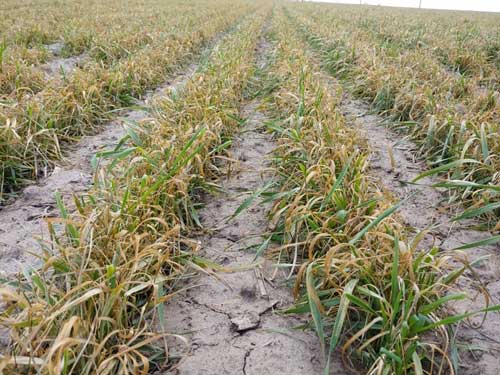 Figure 6. Wheat in northwest Kansas with symptoms of severe injury to leaves and stems resulting from freezing temperatures on April 13-17. Photos by Jeanne Falk Jones, K-State Research and Extension.

We also saw a considerable difference among varieties in their response to the recent freeze events. It is important to note that these differences do not reflect a variety’s winterhardiness. Instead, they seem to be more related to when varieties were released from winter dormancy and started their spring growth. Varieties that began to grow early are showing more freeze damage than varieties that were released from dormancy later, regardless of sowing date (Figure 7). Remember that wheat’s tolerance to freezing temperatures is at its peak during the winter, and then decreases as the crop begins its spring growth – thus, the further away from the depths of the winter, the less a given variety is able to tolerate cold temperatures. In most cases, varieties that released earlier from winter dormancy (for example, WB4458, Paradise, TAM114, Zenda) were showing much more freeze damage than varieties that were released later (for example, WB Grainfied, Rock Star, LCS Chrome, Joe). 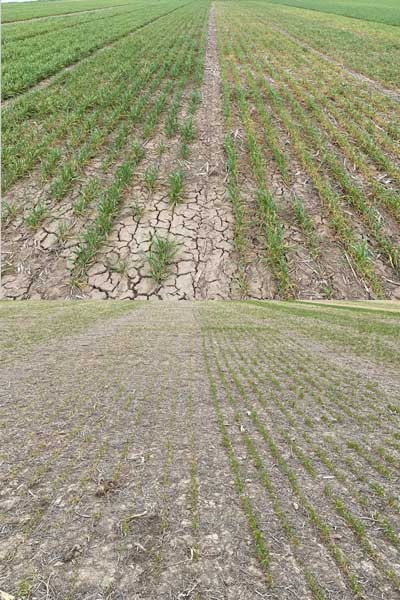