Musk thistle (Carduus nutans) is one of 12 noxious weeds in Kansas infesting nearly 500,000 acres. Musk thistle has been reported in nearly every county in Kansas (Figure 1) and is found primarily in pastures, rangeland, hay meadows, alfalfa, fallow, roadsides, and waste areas. Under the new Noxious Weed Law (March 2021), musk thistle is considered a Category C weed.  That means that musk thistle is well established within the state and has extensive populations.

Control efforts should be aimed at reducing or eliminating new populations and established stands should be managed with any accepted control method.  Accepted control methods include mechanical, chemical, and biological approaches.  Mechanical control involves removing the entire plant or just the reproductive parts to prevent the plants from producing flowers/seeds.  Mowing, digging, and hoeing are common mechanical methods of controlling musk thistle. A number of herbicides are labeled for use on musk thistle and will be discussed below.  Biological control requires a permit and needs to be integrated with other methods.  Head and crown weevils are found in the state, but cannot be transported across state lines.  A flower fly (Cheilosia corydon) is a new candidate species for biological control of musk thistle.

Musk thistle is primarily a biennial or winter annual species. Biennials take two growing seasons to complete their life cycle. Thistles that germinate in the spring will spend the entire summer as a rosette, live through the winter, and bolt the next year in May and June. Winter annual plants will germinate with moisture and warm temperatures in the fall, live through the winter, and bolt the following year. 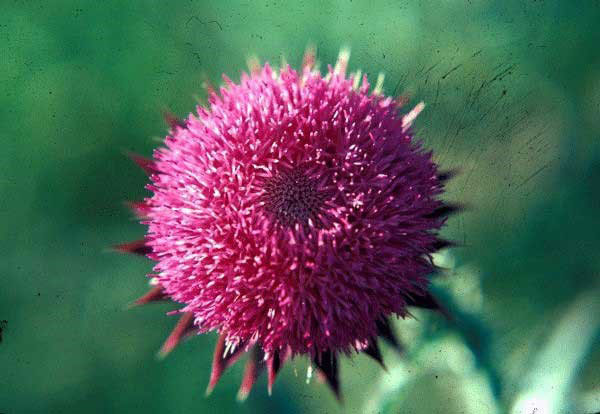 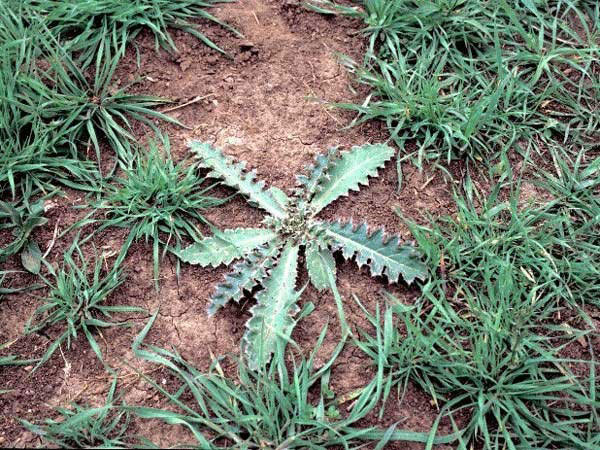 Dry conditions in the fall can reduce control of musk thistle with certain herbicides, but studies in Kansas indicated that a fall application of 2,4-D LVE at 2 lbs per acre was more effective (80% control) than a similar rate of 2,4-D amine (49% control). Dicamba + 2,4-D amine at 0.25 + 0.75 lbs per acre and picloram at 0.125 lbs per acre were also effective (>90% control) on musk thistle treated in the fall.  Other herbicides that have proven effective include 3-5  fl oz/acre aminopyralid (Milestone) and aminopyralid + metsulfuron (Chaparral at 1.5 oz/acre).  Products containing picloram and aminopyralid will not only control rosettes treated in the fall, but will have enough carryover to control emerging seedlings the following spring.

If you need to treat musk thistle this fall, select the proper herbicide for the job.  If possible, select a warm, sunny day to spray. Scattered rosettes can be mechanically removed by digging below the crown.