The 2018-2019 Kansas wheat crop is a study in contrast, with essentially two separate crops (Figure 1). About 50% of the Kansas wheat crop was planted in a timely manner and benefited from ample fall moisture. These fields are usually well developed and, with the ample profile moisture, likely have a high yield potential. However, October was extremely wet with all parts of the state recording at least ¾ of an inch more than normal. Parts of south central and central Kansas had between 5 and 11 inches greater than average. This rainfall delayed sowing of the remaining half of the wheat area in the majority of the state, resulting in the slowest sowing pace since 1994 (Figure 2). The delayed sowing resulted in a less-developed crop going into the winter, often with only the first leaf out, which becomes more susceptible to potential winterkill due to less fall tillering and less time to acclimate to cold conditions. Also, the yield of the late sown-crop will depend more on spring-formed tillers, which are typically less productive. Thus, the yield potential of this crop might be compromised, unless conditions during grain filling have below-normal temperatures and above-normal precipitation. 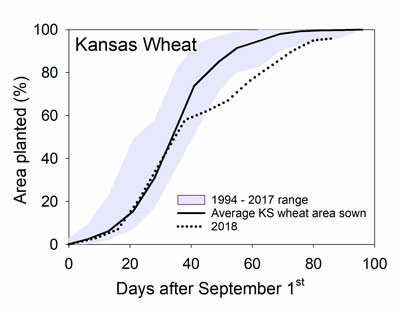 Figure 2. Wheat planting progress in 2018 (dotted line) as compared to the 1994-2017 mean (solid line) and range (purple area). A new record was set for late planting after October 5th.

Mean air temperatures during the 2018-19 winter wheat growing season have been below the long-term normal for the majority of Kansas during both fall and winter (Figure 3). 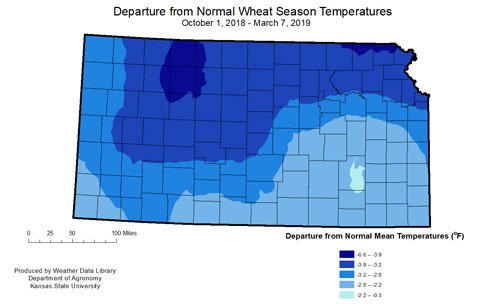 Temperatures were between 1 and 5 degrees F below-normal during October, which delayed development, and 11.3 degrees F below-normal during February, having a substantial impact on soil temperatures within the seed zone (Figure 4). Cooler temperatures during the fall decreased canopy and root development. The crop could potentially have benefited from slightly warmer temperatures to enhance tillering, fall canopy closure, and crown root elongation. Additionally, it will also likely delay spring development. In a year where weather conditions are close to normal, the crop would be at about the first hollow stem stage of development in Hutchinson now (early-to-mid March). However, with cooler air and soil conditions, the crop has not initiated spring growth yet. 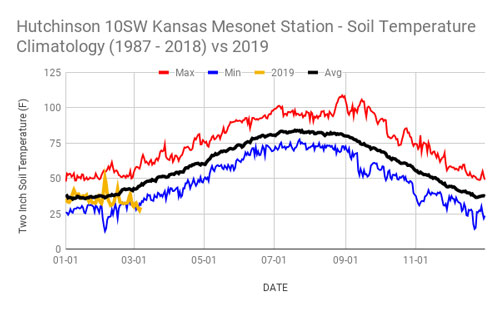 Rain and snowfall over the winter continues to keep soils saturated at the surface in near-record amounts. While this provides ample moisture for the winter crops – it isn’t being utilized yet due to frozen soils (see accompanying eUpdate article on field working conditions). This above-average precipitation and moist soils will also affect decisions regarding fertilizer topdressing to the wheat crop (see accompanying eUpdate article on N management for wheat). Warm temperatures are needed to initiate plant growth to begin uptake of the above normal precipitation the last six months. Forecasted temperatures for the remainder of the month and into April aren’t conducive for the crop to begin growth.