June experienced drier condition than normal especially in the western division.  It ranked as the 44th driest June since 1895, with only the Southeast Division above normal.  As a percent of normal, the North Central was the driest with 1.42 inches, 37 percent of normal.  The Southeast was the wettest at 7.37 inches, 124 percent of normal.  Precipitation carryover from May resulted in little change to the US Drought monitor. Surface temperatures that were warmer than normal dominated June. The statewide average for June was 2.7 degrees warmer than normal, ranking it as the 33rd warmest June of record

Warm, dry weather allowed for rapid progress in wheat harvest until the end of the month, when rains created delays (Figure 1). Harvest results were mixed with some very good yields and test weights and some results that were poorer than expected. The warm conditions also allowed for rapid progress in corn development, but created issues with late-planted corn and soybeans.  Uneven emergence is an issue in some areas. 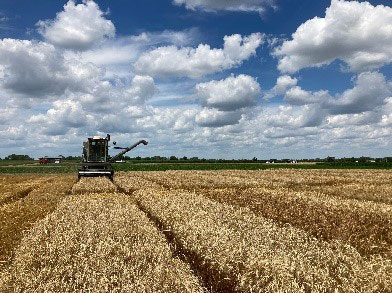 View the entire June Ag-Climate Update, including the accompanying maps and graphics (not shown in this short article), at http://climate.k-state.edu/ag/updates/.