There are many disease organisms that can result in the reduction of corn yields in Kansas. One of the most insidious is the root-lesion nematode because it operates below ground on the roots and often has no specific, identifiable symptoms other than yield loss. It is present at some level in nearly all corn fields in the state. Historically, the largest yield losses, which can exceed 40 percent in individual fields, occur in western Kansas, where a no-till, continuous corn production system is common. 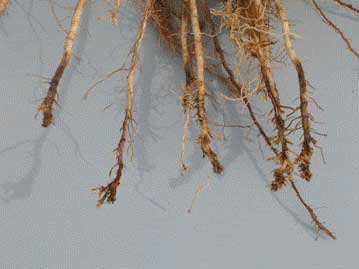 The best way to identify a root lesion nematode problem is by a whole-root assay. Optimal time for sampling is 30 – 40 days after emergence. Suspect plants should be dug from the soil – try to keep some of the soil with the roots. Keep samples away from excessive heat. Samples can be taken to any local county Extension office for mailing or mailed directly to the Plant Disease Diagnostic Lab. Specific instructions on sample collection and mailing can be found at https://www.plantpath.k-state.edu/extension/diagnostic-lab/documents/ppechecksheet.pdf.

There are several commercially available seed treatment nematicides currently marketed, but in university trials, results have been inconsistent. In-furrow nematicides may also be used at planting time. Since root lesion nematode has a wide host range, crop rotation has limited benefits. Other plant-parasitic nematodes that occasionally result in losses include the sting, stunt and stubby-root nematodes.