The hard freezes during the week of April 13-17 could have impacted some alfalfa stands. If so, producers will have to decide how to manage their stands in the coming weeks. 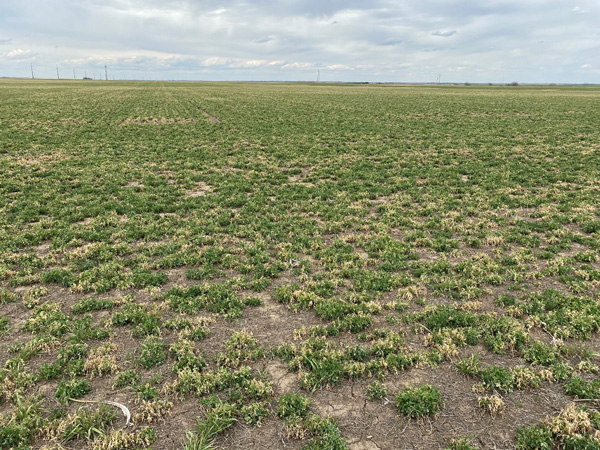 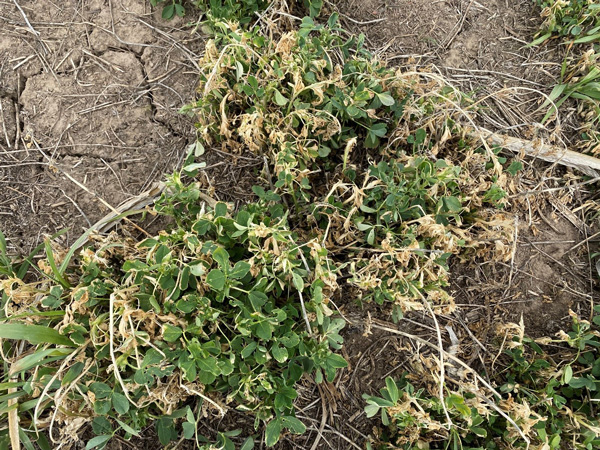 Figure 2. Close-up of freeze-damaged alfalfa. The apical meristems have been killed on some stems. These plants are not tall enough to cut or shred. Regrowth from the crown should begin as soon as it warms up. Photo by Romulo Lollato, Extension Wheat and Forage Specialist, K-State Research and Extension.

Assessing alfalfa for freeze damage is a two-step process, including an evaluation of the shoots and roots.

Step 1.  Analyze the aboveground portion of the plants. Alfalfa plants that are producing several well distributed (symmetrical all around the plant) new shoots are likely healthy and did not suffer freeze damage. If the new shoots are only produced asymmetrically (in one side of the plant rather than all around) and very sparsely, then this plant likely suffered some level of freeze damage and its yield might be compromised. Plants that are not producing any new shoots and/or have been pushed out of the ground (sometimes, frost heaves can uproot alfalfa crowns) might have been killed by the freeze. To decide whether to maintain a field, try to estimate which percent of the plants are healthy, which percent are asymmetrical, and which percent are dead. Ideally an alfalfa stand would have at least about 40 stems per square foot.

Step 2: Evaluate the crown roots of different plants in the field. A healthy root will have an off-white potato-like color with minimum amount of root rot, and will be turgid. Injured roots have a grey coloration and look water-soaked at first, and they will look dehydrated and with a brown tint to it after the water leaves the root. If more than 50% of the root is blackened, the plant will likely die sometime during that year.

In established stands, the growing point is at the top of each stem, and is protected within a cluster of leaves. The leaves may have freeze damage, but the growing point might not be affected. If it is cold enough for a long period, the growing point may also be killed by freezing temperatures. In the photo, many of the terminal buds are frozen and they have a bleached appearance.

No action is needed if new growth begins emerging from the tips of the stems, or if the plant begins branching out below the tips. In both cases, the new growth means the growing points were unaffected and the plants are recovering. If new shoots are emerging from the crown buds, however, there will be very little regrowth from the damaged stems. In much of Kansas there wasn’t enough topgrowth to cut or graze before the freeze, but that is an option, if there is enough growth for it to be worthwhile before the new growth gets tall enough to be damaged by the mowing. Do not cut or damage new regrowth from the crown buds. That could severely damage the stand.

If there is no regrowth occurring at all after 7-10 days of warm weather and the plants are severely wilted without recovery, mow or shred the plants to encourage new regrowth from the crown buds. If you plan to shred or cut the damaged stands, be sure to leave at least 2-3 inches of stubble. This will help encourage regrowth.

Freeze-damaged alfalfa that is only 6-8 inches tall or less will be slower to regrow after mowing or shredding than taller alfalfa because alfalfa plants are depleting carbohydrate reserves from the roots during the first 6-8 inches of growth. With slower regrowth, producers will have to watch especially closely for insect infestations and treat if necessary. Alfalfa taller than 8 inches will have manufactured a new supply of carbohydrate reserves for the root and crown, and will be able to regrow more quickly after mowing or shredding.

At this point of the year, alfalfa weevil larvae have pretty much developed to the pupal stage or have already pupated into adults. There are a few larvae around but most have developed into adults and these adults will feed on stems, especially under windrows.  This adult feeding is called "barking" and can slow regrowth. After the windrows are picked up, these adults can disperse around the field where they can feed a little, until temperatures get into the 80's, at which time they leave the fields for over-summering sites.

Pea aphids have and are rebounding from the weevil treatments and/or the freeze events. However, they are more of a cool weather pest. Hopefully, the return of warmer weather (in the 80's) and the remaining beneficial insects will control any aphids so they don't buildup into field-wide populations that cause concern. Scouting should continue for weevils and aphids even if an effective insecticide application has already been made. If an insecticide has already been applied, pay attention to the label for the pre-harvest interval (PHI) and number of applications allowed per cutting for the product used.

As previously mentioned, freeze damage to alfalfa stands several weeks back may have caused significant damage to root systems. Typically, large, uniform patches of damage within a field are not primarily a result of disease. That being said, damaged roots may be more susceptible to secondary infections by root and crown-rot pathogens such as Fusarium and Phytophthora spp., which may contribute to decline. Freeze damage may also worsen existing below-ground infections. Splitting tap roots is the best way to identify below-ground disease symptoms.

As a reminder, the Plant Disease Diagnostic Clinic is still accepting samples. More information on sample submission can be found on the clinic website (https://www.plantpath.k-state.edu/extension/diagnostic-lab/) and you can contact the clinic directly with questions (clinic@ksu.edu).