Winter observations for the 2019 canola crop

The 2018-2019 fall crop season has been one to remember for wheat and canola growers. From persistent precipitation to wet fields to fluctuating temperatures, one would think that the deck is stacked against this year’s winter crops. Despite the abnormally wet weather, recent observations have revealed a canola crop that is poised for solid yields if a few more pieces fall into place this spring. Winter survival is better than expected in canola trials from north central Oklahoma through central Kansas. If producers were able to get across fields to address spring fertility needs, then we expect to see excellent yield potential develop as we enter the reproductive stages of the winter canola life cycle.

To better understand what is being observed in trials across Kansas, we need to remember what establishment conditions were like last September. For a large portion of the state, soil moisture was in surplus after heavy rains fell in early September. This set the stage for ideal soil moisture in the seeding zone during the optimum planting window for canola. Producers who were able to take advantage of these conditions had little problem getting a fall stand. Producers who were delayed by these rains did not fare as well and may have poorer stands as a result, or they had to abandon the idea of planting canola all together.

Overall, canola fields and trials that were planted on time, in between major rainfall events in September and October, are faring quite well. Minimal winterkill has been observed in this situation (Figure 1). Actually, damage from running or standing water has been more prevalent than winterkill in some cases. Where fall stands were poorer, we are seeing more signs of winter stand losses. 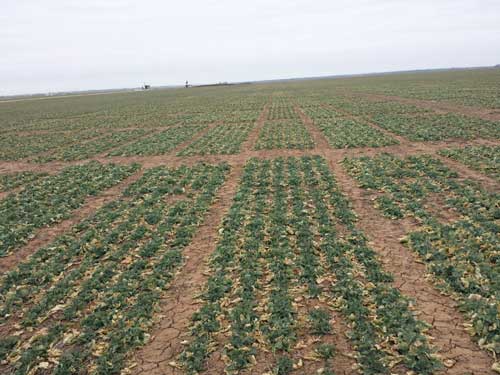 What has allowed the 2018-2019 crop to survive these challenging field conditions? Certainly a little luck played into seeding time, but even some of the later-planted canola had adequate survival even though some thinning has been observed. Figure 2 shows the National Winter Canola Variety Trial at the South Central Kansas Experiment Field near Hutchinson, KS. The trial was planted about a week later than normal on September 28, 2019 and plants were smaller than normal going into the winter months. If problems with winter survival were expected, they would have been observed here. Some of the reasons for better survival might be excellent soil moisture conditions over the winter and snow cover during colder stretches. 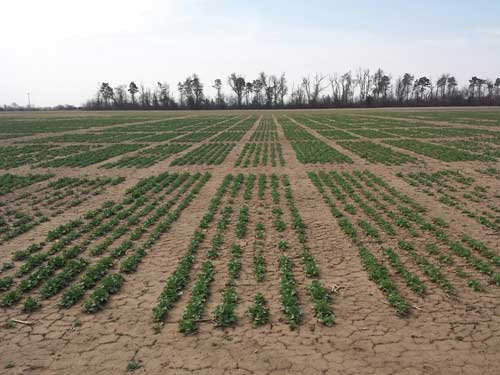 Figure 2. The National Winter Canola Variety Trial at the South Central Kansas Experiment Field. The plot was planted about a week later than normal on September 28, 2018. Photo by Mike Stamm, K-State Research and Extension.

Compared to last year when we saw low temperatures (below 0 degrees F) and dry conditions, low temperatures and wet conditions are better for winter survival as wetter soils hold more heat. Overall, plant size was optimal for survival across the state, with most of the canola crop achieving the 6 to 10 inches of top growth and 6 to 8 true leaves needed. The crop was neither too small nor too big going into the winter. In northern Kansas, snow cover aided with survival in providing a layer of insulation. Further south where they maybe didn’t have as much snow, temperatures were more moderate, and this will often lead to less winterkill.

One of the bigger benefits to this crop was a lengthened winter hardening period. Typically, winter canola hardens off as temperatures approach freezing over a number of days, and it is important to have a few days with low temperatures around 28 degrees F to induce hardiness. A slow, sustained drop in temperatures is critical in preparing a canola crop for overwintering.

Winter survival is a complex trait that can be influenced by many factors. Looking back at the recent history of canola production, winterkill has been caused by different weather patterns.  We have observed winterkill caused by bitterly cold temperatures for extended periods of time (2013-2014), extreme temperature fluctuations on an inadequately cold-acclimated crop (2014-2015), too much fall growth causing severe crown and stem damage as cold temperatures set in (2016-2017), and cold winter temperatures coupled with dry soils (2017-2018).

In 2018-2019, the canola crop had adequate time to harden off for a sustained winter, and November is the critical month for this to occur. As measured by the Manhattan Mesonet station, the number of November days at or below 28 degrees F were 19, 7, and 3 for 2018, 2017, and 2016, respectively. The greater number of hardening days had a huge impact on the crops ability to survive, compared to years like 2016 when cold temperatures set in on a poorly acclimated crop (too few hardening days). Over the past five years, November 2018 had the most days with temperatures at or below 28 degrees F (19 days) since 2014 (17 days).

The coldest November temperature was observed on the 13th (12.4 degrees F), which was lower than the coldest December day (12.6 degrees F) on the 29th. Actually, warmer December temperatures induced regrowth of leaf tissue in Manhattan. Canola has the ability to lose and regain winter hardiness, which may or may not be detrimental to survival. In 2018-2019, it was a benefit and a gradual cool down occurred, following the warm period, which enabled the crop to regain some hardiness. Typically, canola will not regain hardiness to the level that it once had, but this did not negatively affect the crop in 2018-2019.

Even though cold temperatures may not cause winterkill, cold temperatures can have unseen negative consequences on crop growth and development. Freezing and thawing, like we saw repeatedly in 2018-2019, cause cracking in the crown or root, allowing fungi to enter that create root decay. Plants may appear to regrow normally in the spring, but after some time, the severely damaged plants will wilt, turn bluish-gray, and eventually die (Figure 3). We are starting to see this in a few fields and research trials. Other affected plants may continue to grow normally and never show any signs of damage, but could have weakened stems which may eventually lead to lodging. 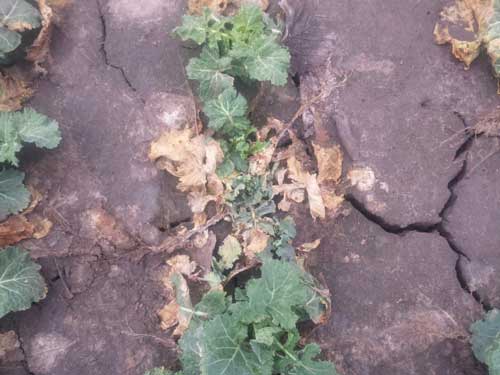 Figure 3. The plant in the center is losing leaf area and wilting as a result of severe crown damage over the winter. Photo by Mike Stamm, K-State Research and Extension.

In addition, canola can compensate for a thin stand because it is an indeterminate crop, producing more flower buds than it can actually support. Canola will branch out and fill in gaps in the field when stands are reduced, much like a soybean plant will in a reduced stand. Having adequate fertility levels and soil moisture are critical for inducing this compensatory effect. Mild temperatures to generate more plant biomass will go a long way toward helping the crop to compensate for a poor stand. Before tearing up a spring stand of canola, evaluate the final plant population. Spring stands of 4 to 8 plants per square foot are ideal, but we have seen stands of 1 plant per square foot produce harvestable yields if the remaining plants are evenly distributed across the field.

There are some positives to this narrative: