Update on planting progress for corn and soybeans - May 28, 2019

Corn planting in Kansas and the rest of the U.S. Corn Belt is proceeding following one of the slowest rates ever recorded. For Kansas, corn planted progress moved from 61 to 70 percent in one week from May 20 to 28 (USDA Kansas Crop Progress and Condition Report). Similar progress has been observed for Iowa and Nebraska, but Illinois, Indiana, and Ohio are still quite behind (Figure 1). For soybeans planted progress is 22 percent, behind the 63 percent from last year and from the 41 percent 5-year average (Figure 1). There has been similar progress for Nebraska but large departures from planted progress for Iowa, Missouri, Illinois, Indiana, and Ohio. 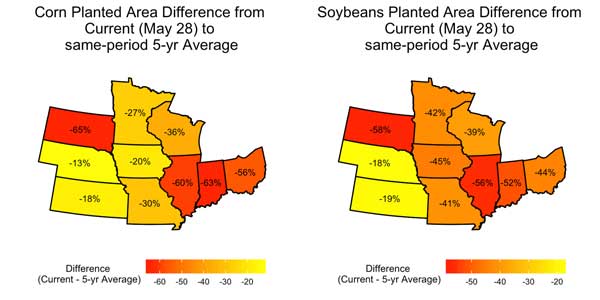 Saturated soil conditions impacted the expected number of suitable working days in a given period of time. Knowing how many suitable working days might be available to conduct fieldwork for a given crop operation impacts crop choice and machinery investment decisions. The most active planting dates for corn are usually between April 15 and May 15 (20th to 80th percentile, respectively) and for soybeans and grain sorghum planting, those dates are from May 15 to June 20 (20th to 80th percentile, respectively) (2010 USDA NASS handbook).

For Kansas, since the week of April 29 (Figure 2), the number of days suitable for fieldwork has been declining, presenting at the lowest point with less than 2 days suitable to conduct any fieldwork, which in many situations was potentially only 1 day before the next rain event. 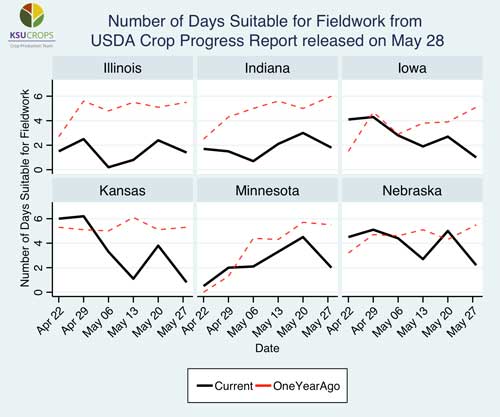 Figure 2. Number of days suitable for fieldwork from USDA Crop Progress Report on May 28, 2019. 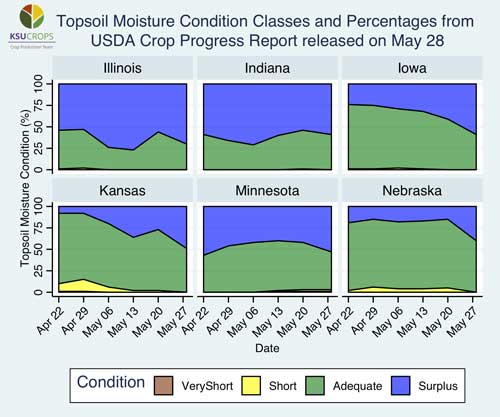 In summary, both corn and soybeans are trailing their respective five-year and last-year progress averages last week, with corn being well behind.

Depending on your location, delayed planting will be a normal situation considering the weather already experienced this spring. Again, crop insurance considerations and the main agronomic practices to achieve a successful crop will be critical factors guiding producers’ planting decisions.