Management considerations for hailed out wheat and summer crops

There were several hail reports during the months of June and July in Kansas (Figure 1), impacting wheat that had not yet been harvested and summer row crops (Figure 2). Hailed out fields require different management considerations depending on hail intensity. For instance, any further investment in hailed out fields will depend on the yield potential after the hail event. Additionally, a hail event might affect the subsequent crop as well, especially in the case of wheat where the hail results in many seeds that might later become volunteer wheat. 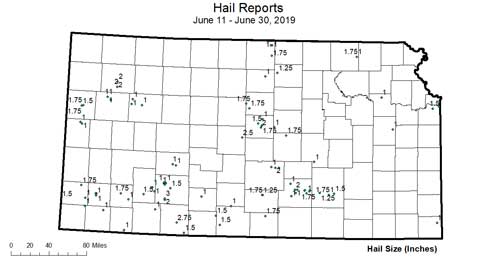 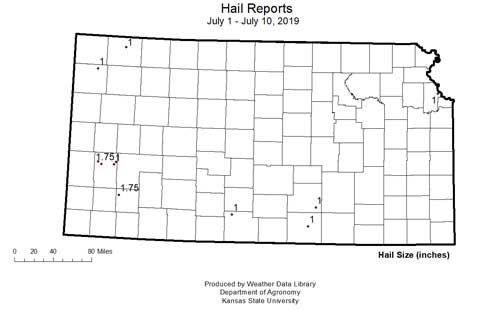 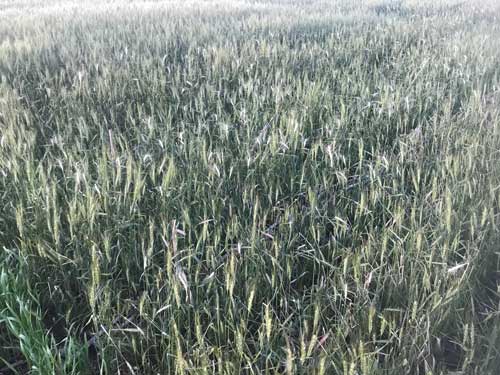 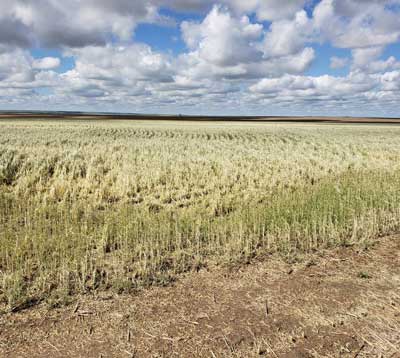 Where wheat suffered hail damage after heading, volunteer wheat often emerges even before the existing field is harvested – as much as two to three weeks or earlier than it would normally emerge. If volunteer wheat is not controlled throughout the summer and is infested with wheat curl mites, the mites will survive until fall and could infest newly-planted wheat at that time. Wheat curl mite infestations in wheat often lead to wheat streak mosaic infections.

Where wheat was hailed out and volunteer has already emerged at the time of harvest, control should begin immediately after harvest if possible. This is true even for fields that got hailed out relatively early during grain filling, as wheat grain at soft dough or later stages of development already has the potential to germinate. If volunteer has emerged and is still alive shortly after harvest in hailed-out wheat, wheat curl mites could easily build up rapidly and spread to other volunteer wheat that emerges later in the season. On the other hand, if this early-emerging volunteer is controlled shortly after harvest, that will help greatly in breaking the “green bridge”. However, if more volunteer wheat emerges during the summer, follow-up control will still be needed. While hailed out fields may require one more field passes than normal to control volunteer wheat, it will help prevent even bigger problems down the road. It should be noted that grazing volunteer is not an effective option because there is green wheat material left and the mites can be living in that material.

Most of the corn impacted by the last hail events from July were advanced stages of crop development. If the growing point was out of the ground, there could be major damage. Wait a few days, then go back out to look for these signs: If the main stem starts to grow again and new leaves come out of the main stem, then there is little damage. If you start to see tillers, you may be in trouble. Tillers will start growing outward from the base of the damaged plant and even though they look okay now, at tasseling and ear forming time the plant will not be productive. This plant should be not counted for stand count when you are evaluating whether to replant.

Do not make any decisions right away. An accurate estimate of plant survival should be done in the coming days to more precisely determine damaged plants that will survive vs. missing plants – causing stand reductions. Young corn has a great capacity to recover from early-season hail damage. Scout your fields and check for potential problems associated with these weather events.

This disease is caused by a bacterial, not a fungal, infection. Symptoms are gray to light yellow stripes with wavy margins that follow the leaf veins. Within these lesions, dark green to black, water-soaked spots that take on the appearance of freckles usually appear and are an excellent diagnostic symptom (Figure 3).

Goss’s wilt is most common in northwest Kansas, northeast Colorado, and southwest Nebraska but has been reported at one time or another from most areas of Kansas. It can be controlled with resistant hybrids and crop rotation. 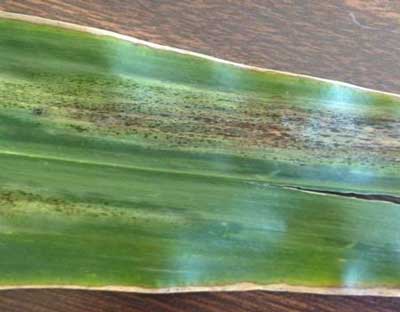 Use of fungicides following a hail event

When strobilurin fungicides (Headline, Quadris, etc) first received a “plant health” label, it was suggested that application of these products following a hail event would help the plants recover from injury and result in increased yields. Many university studies have since shown that there is no benefit from applying a fungicide after a hail event, unless a fungicide application was needed for disease control before the hail event occurred. The following is a quote from an Iowa State University study published in the journal Plant Health Progress:

The lack of significant yield response observed between treatments receiving fungicide application after simulated hail and the untreated control in this study are consistent with results from Bradley and Ames (2010) and from other university studies testing fungicide use after actual hail events (Conley et al. 2010; Schleicher and Jackson-Ziems 2014; D. Smith, personal communication). These findings, coupled with the observation that foliar disease severity was lower in plots receiving simulated hail compared to non-hail control plots, supports the assertion from Wise and Mueller (2011) that the best chance for economic profitability from fungicide use in corn results when fungicides are applied for disease management when risk and actual disease occurrence is high. (Sisson, et. Al. 2016. Plant Health Prog. 17:6-12).