There was a very sharp contrast in weather between 2013 and 2012 in Kansas. The average temperature for 2012 ranked the warmest in 119 years (since 1895). In contrast, 2013 was the 33rd coldest year on record. That doesn’t mean that there weren’t warm temperatures. All divisions saw temperatures exceed the 100 degree F mark.  The warmest reading was 113 degrees, set on June 12th at Tribune. The big difference between 2012 and 2013 was the start of the growing season. In 2012, many locations had the last spring freeze in mid-March. For several locations this was the earliest start of the growing season on record. In 2013, the average date for the last spring freeze was May 1st. The first fall freeze was more typical, with the earliest recorded at Tribune on October 5th, and the latest recorded on November 12th at Elk City Lake. The average date for first frost was October 19th. 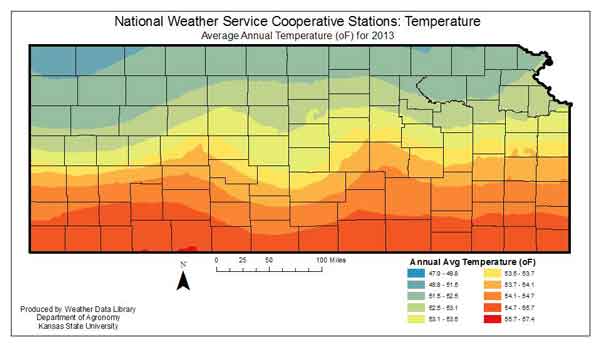 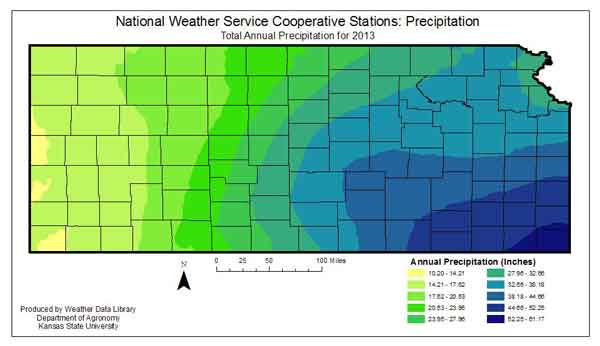 Snow was more of a factor in 2013 than it had been for several years. The state average annual snowfall for 2013 was 29.6 inches. The Goodland NWS office, in Sherman County, recorded the greatest total at 56.0 inches. Pittsburg recorded the lowest total for the year at 6.1 inches. 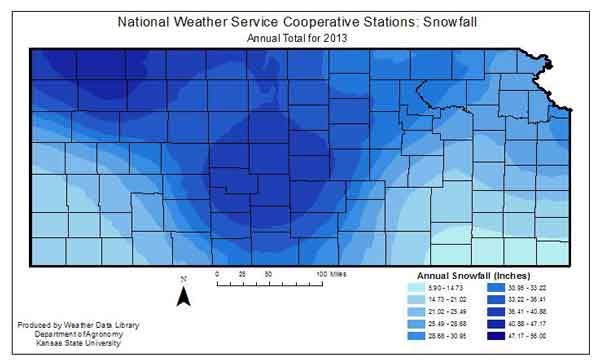 While drought conditions have not been eliminated, they improved significantly during the year. At the beginning of 2013 the entire state was in severe drought or worse. Wet conditions during the summer eased the impacts significantly. By the end of the summer, most of the eastern half of the state had moved into a drought-free status. Lack of moisture in the late fall resulted in deterioration. That meant abnormally dry conditions returned to the east, and severe drought expanded again in the West. Still, the exceptional drought status was completely erased from the state, and the portion of the state in severe drought shrank substantially. Unfortunately, the continued dry conditions and below normal moisture have stalled any improvement. Little change is expected during the winter, but normal Spring rains are critical for continued improvement in drought conditions. The El Niño/Southern Oscillation (ENSO) is expected to remain neutral through the winter, which provides little guidance for the spring season outlook.