Defoliators are still present in most soybean fields throughout north central and south central Kansas, especially in double cropped fields. However, infestation levels are still relatively low and growing conditions still seem to be really good.

Podworms (corn earworms/sorghum headworms) are just starting to move into soybeans from sorghum as the sorghum gets past the soft dough stage. Thus, as the soybeans are in the reproductive stages, with new succulent pods being added to the plants, these larvae, plus adult bean leaf beetles and possibly stink bugs, may start feeding on them, which can impact yield pretty quickly. Therefore, using a drop cloth and vigorously shaking the plants over it to count the bugs that fall on it is highly recommended to quantify the pests present, which is necessary to determine management options.

Also, the results of Dectes stem borer tunneling is becoming visible as scattered petioles start to die.  Most of the larvae sampled were still relatively small (Figure 1), i.e., probably only 1/4 - 1/3 grown. 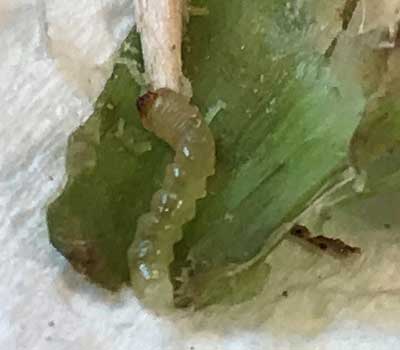 Much disparity in sorghum development exists throughout north central and south central Kansas, mostly due to weather-caused delays in planting.  So, there are many different levels of “worms” infesting this sorghum from whorl stage to some that is already soft dough stage. Therefore, there are also different stages of “headworms” (Figure 2) from small 2nd instar larvae to almost mature 5th instar larvae.  Sampling needs to be initiated as soon as plants start flowering to determine infestation levels. 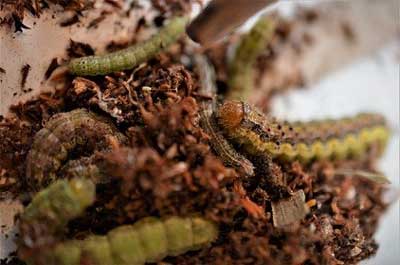 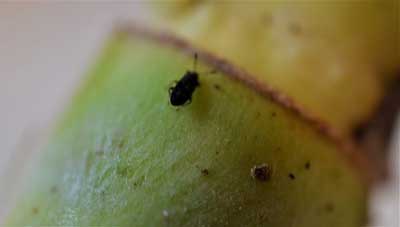 Also, some fields throughout north central Kansas have significant infestations of cattail caterpillars (Figure 4).  These are often confused with corn earworms or fall armyworms, but they are leaf feeders, not part of any “headworm” complex. 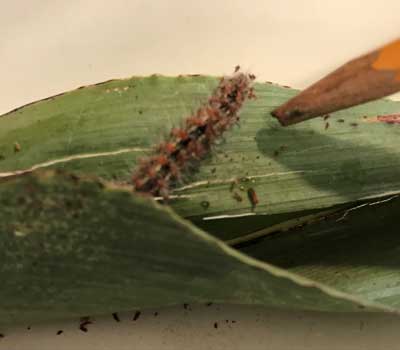