Recent rains in Kansas will cause some Hessian fly adults to begin emerging from the oversummering flaxseed. Summer survival of the Hessian fly is usually enhanced under no-till or reduced-till systems.

One of the most critical times in the life cycle of Hessian fly, from the perspective of newly planted wheat, is late summer and early fall. The Hessian fly lives through the summer in residue of wheat, wheat-related species, rye, and barley as brown, 1/8-inch long capsule-like cases (puparia) commonly called flaxseeds.

Tiny, fragile flies emerge from the flaxseed on warm fall days from August through November, often after a rain. It does not take much moisture to get adult fly activity. We have had spikes in activity from just fog/heavy dew events.

The adult Hessian fly is a tiny, dark-colored insect about 1/8-inch long that resembles a gnat. These adults only live for one to three days, during which time they mate. After mating, females lay eggs in the leaf grooves of fall-seeded (preferably seedling) wheat. Though tiny, eggs can be seen with the unaided eye and resemble early stages of wheat leaf rust.

Only a portion of the population will emerge as adults at any one time. Some flaxseeds survive in a dormant stage for weeks, months, or even years. This makes the exact source of an infestation difficult to document and allows addi­tional broods to develop. Under favorable weather condi­tions, volunteer wheat present in or adjacent to infested fields can support development of a summer brood. Injury to volunteer wheat is of little consequence, but the indi­viduals arising from this brood may produce a secondary fall brood that is likely to injure the planted crop.

After the eggs are laid on wheat, they will hatch into tiny larvae within three to 10 days. These larvae migrate downward during the night when humidity is high. Larvae cannot survive exposed on the leaf surface. They move down the plant between the sheath and stem, stopping just above the crown, generally just below the soil surface. Larvae feed by withdrawing sap from the plant for eight to 30 days. Temperature influ­ences development, and most larvae mature before the onset of cold weather. Mature larvae are shiny, whitish, legless and headless maggots about 3/16-inch long. Full-grown lar­vae gradually form flaxseed, and just as in the summer, the insects pass the winter in this flaxseed stage.

Fall infestations are not always conspicuous at first. Infested shoots are stunted and sometimes killed. The entire stand may be lost, especially if significant infestation occurs shortly after germination while plants are in the seedling stage. If tillering has begun at the time of infesta­tion, only individual tillers may actually be killed. Exami­nation of an infested tiller usually reveals an undeveloped central shoot with an unusually broad and thickened, bluish-green leaf. To confirm the diagnosis, carefully remove the plant and roots from the soil. Look closely for mag­gots or flaxseeds by gently pulling the leaf sheath away from the stem and inspecting all the way down to the base of the plant. 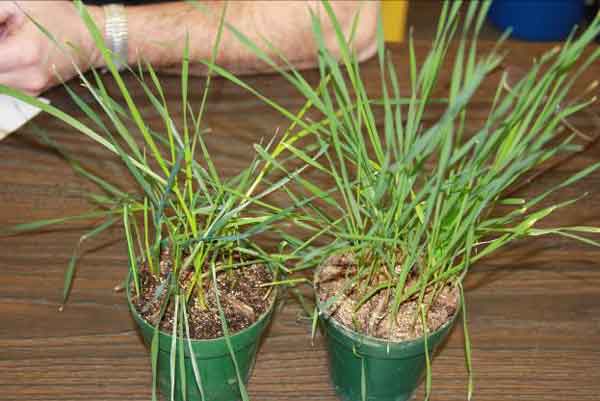 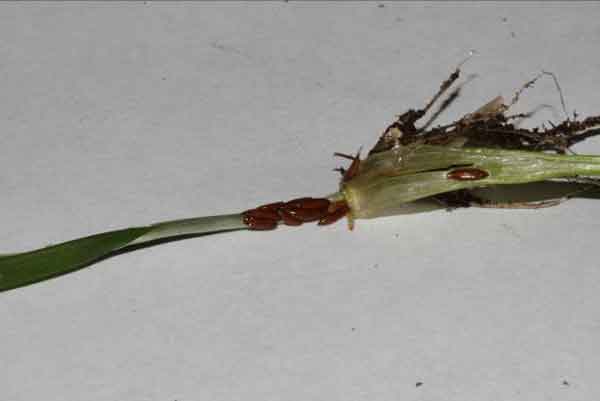