Cropland can be quite susceptible to wind erosion under some conditions. Marginally productive cropland may not produce sufficient residue to protect against wind erosion. In addition, overgrazed or poorly vegetated rangeland may also subject to wind erosion.

Emergency Tillage. Emergency tillage is a last-resort method that can be effective if done promptly and with the right equipment. The goal of emergency tillage is to make the soil surface rougher by producing resistant clods and surface ridges. A rough surface reduces wind speed. The larger clods and ridges resist movement and provide traps to catch the moving soil particles.

Chisels with single or only a few tool ranks are frequently used to roughen the soil surface. The combination of chisel point size, speed, and depth that produces the roughest surface with the most firm, resistant clods should be used for emergency tillage. 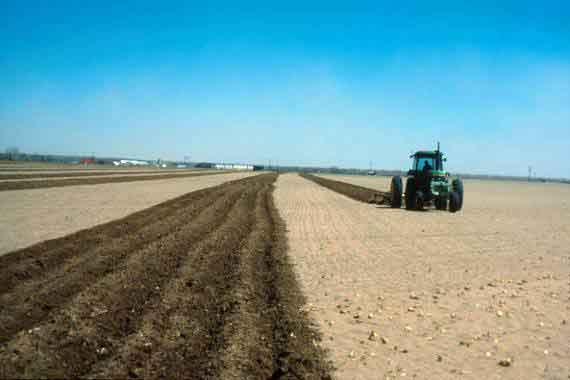 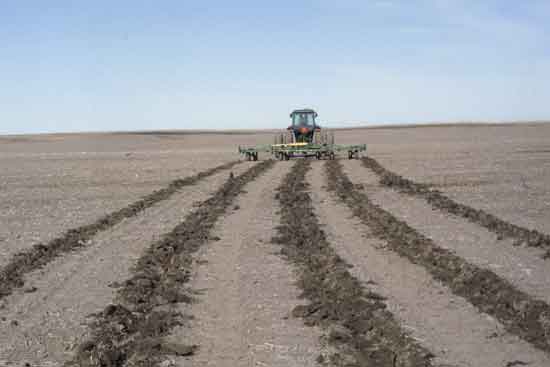 If 50% of the area has been tilled and wind erosion persists, the omitted strips can be emergency-tilled in a second operation to make result in full-cover tillage. If a second tillage pass is needed, it should be at a greater depth than the first pass. Wide chisel spacings are used in the full-field coverage method. The space between chisel grooves can be chiseled later should wind erosion persist.

Loose sandy soils require a different tillage approach to effectively control erosion. Clods cannot be formed at the surface that will be sufficiently resistant to erosion on sandy soils. Erosion resistance is achieve through building ridges and furrows in the field to provide adequate protection.

A 14-inch moldboard lister spaced 40 to 50 inches apart (or an 8-inch lister on 20- to 24-inch spacing) is needed to create sufficient surface roughness. The first listing pass should be shallow, not more than about 4 to 5 inches deep. Then, when additional treatment is needed, the depth should become progressively deeper. Alternatively, for the second treatment the original ridge may be split.