There have been some extremely high temperatures during the last week in Kansas. While this is not unusual for this time of year, the high temperatures have caught some of the wheat during early to mid-grain fill in northwestern, northcentral, and west-central Kansas. The wheat in these regions will likely be most affected by the heat stress this year since the crop was behind in development (watery ripe to early dough stages, Figure 1) and therefore the hot temperatures matched more sensitive phases of the grain-filling period. In southeast, south central, and southwest Kansas, the wheat is mostly mature or near physiological maturity and should not suffer from the consequences of the heat stress as much. 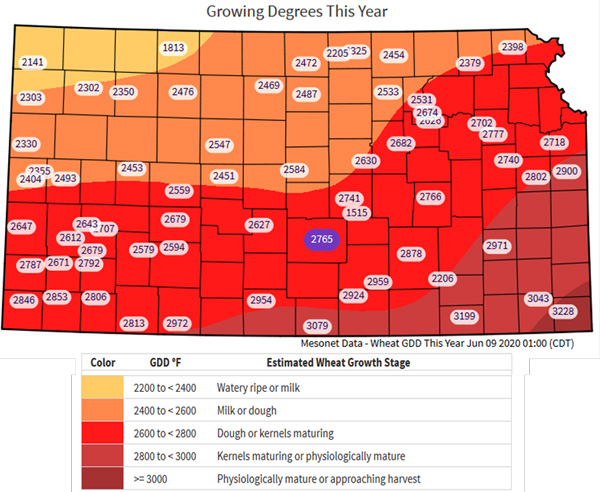 Figure 1. Estimated wheat growth across Kansas stage based on accumulated temperatures since January 1.

What effect will these temperatures have on the wheat crop?

Wheat begins to suffer when temperatures get above ~81 degrees F. At these temperatures, photosynthesis slows down and stops, but the rate of respiration continues to increase. Basically, the plants begin to use more sugars than they can produce by photosynthesis. At ~91 degrees F, key enzymes begin to break down and stop functioning. As a consequence, the plant does not accumulate sugar (starch) on the grains during heat stress (Figure 2), which results in decreased wheat yield. Protein accumulation, on the other hand, seems to be unaffected by high temperatures and occurs normally under heat stress conditions (Figure 2). Due to a decrease in sugar accumulation coupled with normal rates of protein accumulation, wheat under heat stress tends to have a greater percent protein content. 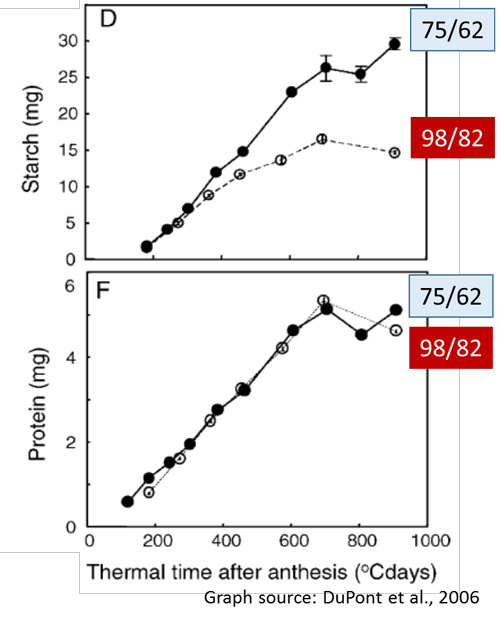 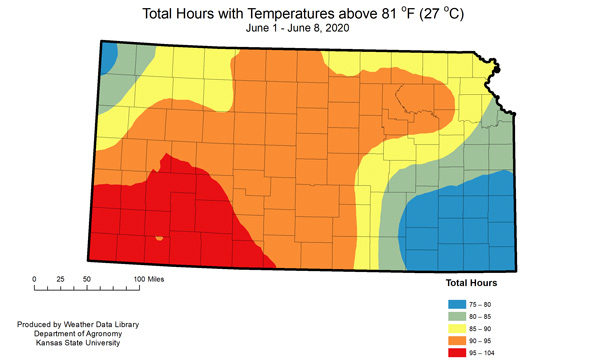 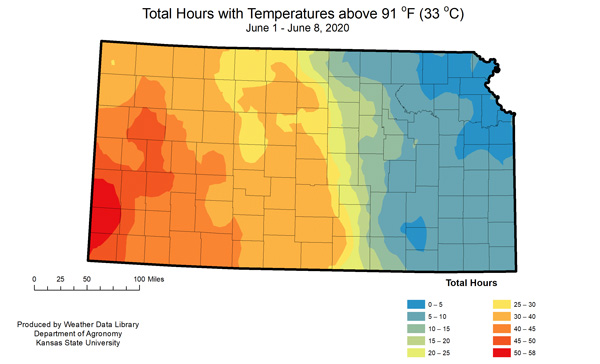 Figure 3. Number of hours when temperatures were above 81 (upper panel) and 91 (lower panel) degrees Fahrenheit during the June 1 - 8 period.

A period of high heat will also destroy membranes of chloroplasts and chlorophyll molecules. Once destroyed, these compounds will not be replaced. This will result in permanent browning of the leaves. Heat stress is often worsened by drought stress. A good example of the effects of heat and drought stresses on wheat leaf persistence is shown in Figure 4, where the dryland system senesced leaves prematurely (upper panels) as compared to the irrigated system which maintained healthy leaves for at least an additional two weeks (lower panels). While grain fill can recover from short periods of heat stress if conditions are otherwise favorable, we might expect the impact of the heat stress will be worse in with prolonged periods of temperature above 82 degrees especially in areas where there is little or no soil moisture. Unfortunately, this is the reality for the majority of the wheat in northwest, west central, and north central Kansas. Plants can cool themselves more easily when soils are moist than under dry soil conditions, which would not be a reality for the majority of Kansas growing region this season. 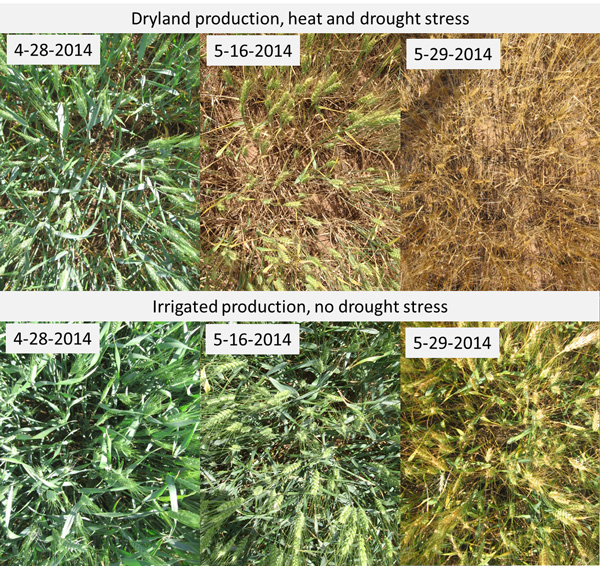 Figure 4. Canopy cover photos taken from two nearby fields planted at the same. Upper panels reflect early leaf senescence observed in the dryland system as a consequence of both heat and drought stress, while lower panels reflect the longer period of time with healthy leaves observed in the irrigated system. Photos by Romulo Lollato, K-State Research and Extension.

Another common effect of both extreme heat and drought is premature death of the heads (Figure 5). This can happen to heat-stressed wheat and is worse in fields where the root systems were unusually shallow due to late-planting or dry conditions. During this growing season, late-planted wheat fields such as those planted after soybeans in central Kansas, or planted after corn in western Kansas, will likely be more exposed to heat stress due to a combination of later maturity (due to alter planting) and shallower root system. Those late-planted fields were also more affected by the April freeze damage, which terminated many tillers and further delayed their maturity. In this situation, the extreme heat can cause enough additional stress that the entire head simply dies. When this happens, the heads will turn white – almost overnight in some cases. 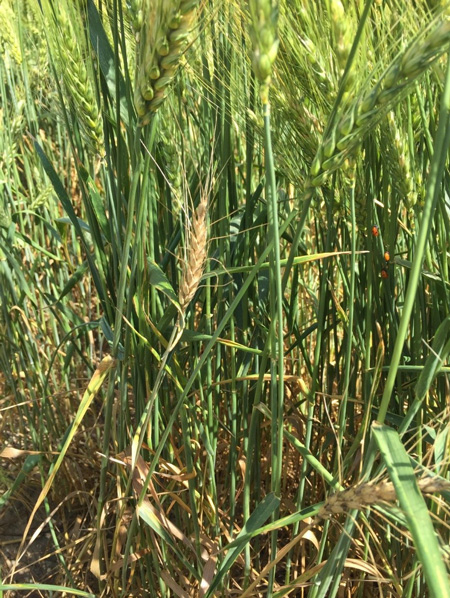 Figure 5. White heads as a result of premature death caused by period of extreme heat. Photo by Romulo Lollato, K-State Research and Extension.