In many areas of the state, dryland corn has received plenty of rain and the crop is in good condition. But parts of Kansas are still short on topsoil and subsoil moisture. Since the growing season is progressing at high-speed, it is best to be prepared to take a close look for symptoms of potential drought stress.

One of the first visible corn responses to insufficient water availability is leaf rolling. If the stress is severe, the leaf rolling process can be detected even very early in the morning. Leaf rolling is just a plant defense mechanism to reduce transpiration and plant canopy temperature, and with an overall improvement in water use efficiency. Under continuous drought for several days, reductions in leaf elongation and in plant height should be expected. 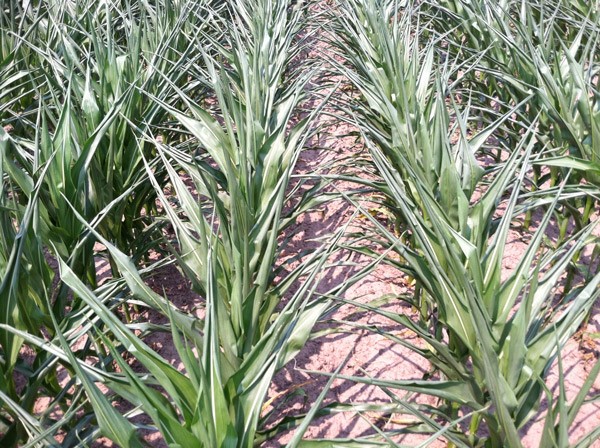 Shorter, less leafy plants are also among the most visible symptoms of drought stress conditions. Plants may not be as green as usual if chlorophyll production is affected. In addition, root systems will be smaller under drought conditions since all below and above-ground plant growth will be affected. Those symptoms are the outcome of plants that are less efficient in growing as photosynthesis is slowing. 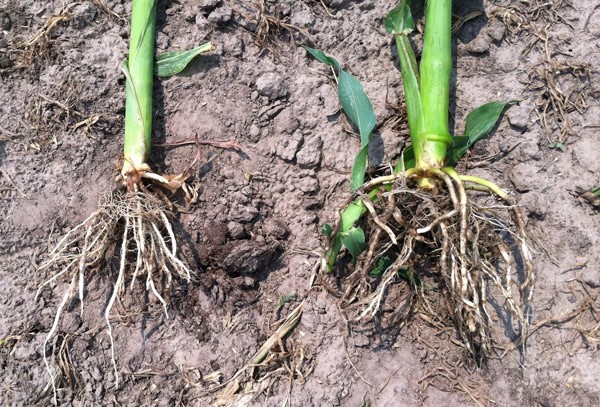 Overall reductions in potential yield can be expected even if the stress is occurring early (10-leaf to 15-leaf stages) or late (dough and dent stages) in the crop growing season.

At what stage of growth is corn most sensitive to drought stress? To answer the question, we need to know the most important growth stages for grain determination. The final number of kernels for corn is determined around the pollination period (2 weeks before and 2 weeks after flowering). Thus, corn is extremely sensitive to drought stress during that period. Drought stress directly affects the final number of kernels through different processes, such as:

1. Potential delays in silking (asynchrony between the development of male and female reproductive parts). This happens when the tassel is shedding pollen but the ear is not yet receptive (silks are not yet out of the husk).

4. Pollination is concentrated in just a few days. In general, pollination takes place earlier and with a short duration under drought stress. High temperatures can also potentially impact pollen viability.

5. Even when pollination is effective, kernel abortion or cessation can occur right after flowering, in the blister and milk stages, if drought stress continues.

Under extreme drought and heat stress, plants may be barren, with no ears being formed at all. 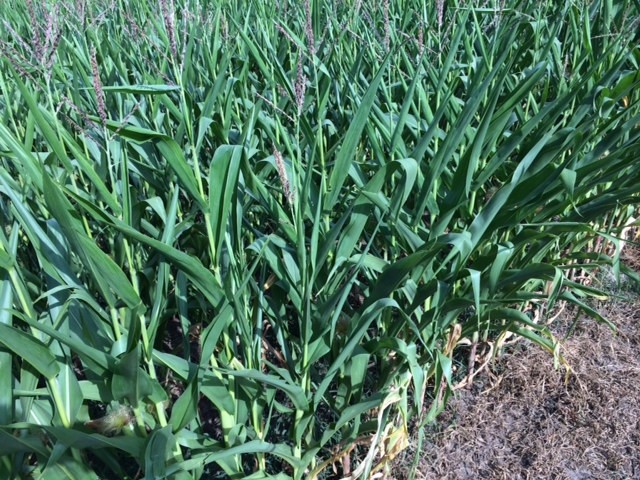 Management practices and other factors

From a management practice perspective, situations that tend to make corn more susceptible to drought stress include high plant densities, narrow row spacing, and excessive applications of fertilizer or manure. Also, sandy soils are more prone to the drought stress since they have a low capacity to hold water.

Scout your acres for drought symptoms. The impacts of the drought stress on grain yield can be known with more precision right after flowering. If the stress is impacting the potential kernel number, and if the projected conditions for the rest of the growing season are not likely to change, yield reductions can be expected due to low kernel number and weight.