Cooler weather brings the return of the Mesonet Freeze Monitor

The first freeze of the season occurred in September, and a hard freeze is expected this weekend. The Freeze Monitor is a handy tool to check conditions in your area. Have freezing conditions been recorded? How does it compare to average? The average freeze date in northwest Kansas is as early as the last week in September. However, southeast Kansas does not usually see freezing temperatures until the end of October (Figure 1). Average dates for the first occurrence of 24 °F temperatures are even later (Figure 2). 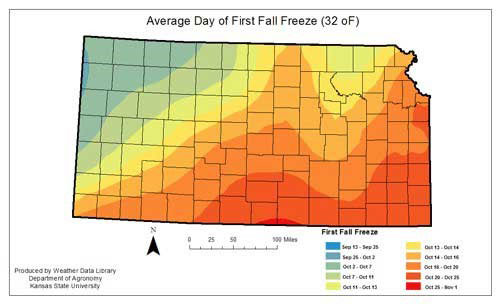 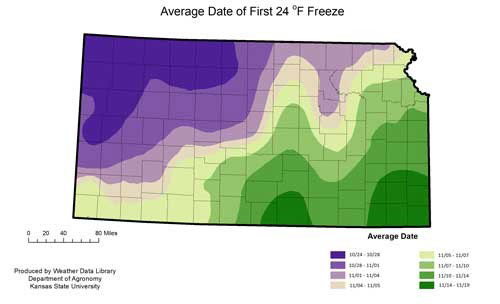 Historically, almost all parts of the state have recorded freezing temperatures as early as September. Earliest first freeze on record in Kansas is September 3, 1974, when many stations dropped below freezing. This year we’ve seen some record early dates for the first freeze.

The Kansas Mesonet’s Freeze Monitor (http://mesonet.k-state.edu/weather/freeze/) is now available for the 2020 fall frost/freeze season. This tool displays the coldest temperatures observed across Kansas during the previous 24 hours. It answers the frequent question: How cold did it get last night? It also tracks the first fall freeze date for each station for comparison to local climatology (http://mesonet.k-state.edu/weather/freeze/#tab=chart-tab&mtIndex=1). Data updates every twenty minutes on both the map and the table (Figure 3).

Another tool important for producers and gardeners is the duration below freezing, as some crops and commodities have lower thresholds for damage. This feature allows users to select options to view maps/data of the duration below freezing (32 degrees F http://mesonet.k-state.edu/weather/freeze/#tab=chart-tab&mtIndex=1) and the number of hours below 24 degrees F (http://mesonet.k-state.edu/weather/freeze/#tab=table-tab&mtIndex=2). While both are of interest, the lower threshold is of great importance to wheat growers later into the fall/winter season. 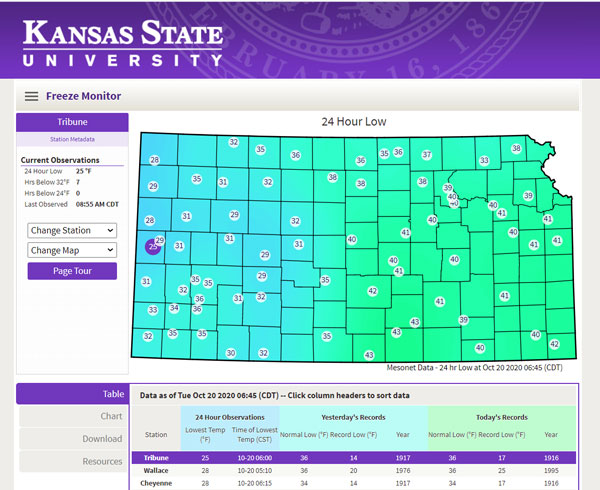 Figure 3. View of the Freeze Monitor webpage for October 20, 2020, with the Tribune station selected as an example. Source: mesonet.ksu.edu/weather/freeze 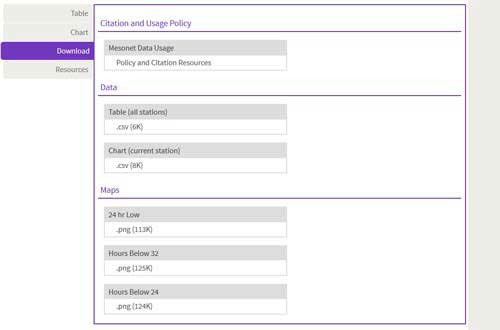