Causes of pale or yellow wheat

Some fields of wheat in Kansas have a pale or yellowish color. In most cases this is a direct result of nitrogen deficiency, sulfur deficiency, wheat streak mosaic, or barley yellow dwarf. 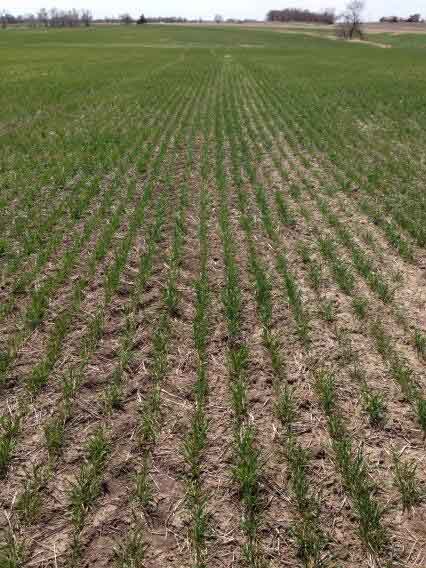 Figure 1. Pale wheat in north central Kansas, April 22, 2014. This field had nitrogen applied recently but needed rain to move it into the soil. Photo by Jim Shroyer, K-State Research and Extension.

The most common causes of yellow wheat this spring are:

Poor root growth. This is most often due to dry soils, late planting, or poor seedbed conditions at planting time. If the root system is poorly developed, plants are more likely to have a nutrient deficiency, such as nitrogen or sulfur deficiency.

Nitrogen (N) deficiency. Nitrogen deficiency causes an overall yellowing of the plant with the lower leaves yellowing and dying from the leaf tips inward. Nitrogen deficiency also results in reduced tillering, top growth, and root growth. The primary causes of N deficiency are insufficient fertilizer rates, poor root growth, drought, a problem with application methods, leaching from heavy rains, and the presence of heavy amounts of crop residue, which immobilize N. If the yellowing occurs in streaks in the field and a surface topdress application was made, the deficiency is probably due to an application equipment problem or the presence of residue windrows. If the yellowing is more general in nature, it could be that the fertilizer has not yet moved into the soil because of a lack of rain.

Sulfur deficiency. Sulfur deficiency symptoms in wheat can be similar to nitrogen deficiency, with a general chlorosis of the leaf. However, with S deficiency the whole plant is pale, with a greater degree of chlorosis in the young leaves. Sulfur is not mobile in the plant like N, so lower leaves do not show more severe deficiency symptoms than the upper leaves unlike N. The uniform nature of the yellowing on the plants is one means of diagnosing S deficiency in wheat. Another common difference compared to N deficiency is the pattern in the fields. Sulfur deficiency often occurs first on slopes, eroded areas, on coarser soils, or wherever organic matter levels are lowest. Therefore, deficiencies are usually limited to only certain areas of the field.

To determine the cause of the yellowing, check the following: