Brown wheat mite: Will this yearâs problems carry over into next season?

Brown wheat mites, Petrobia latens (Müller), have been a problem on many wheat fields throughout Kansas this year, due to the extended severe drought. The areas of brown wheat mite infestation have extended from western Kansas into central Kansas, as far east as I-135. 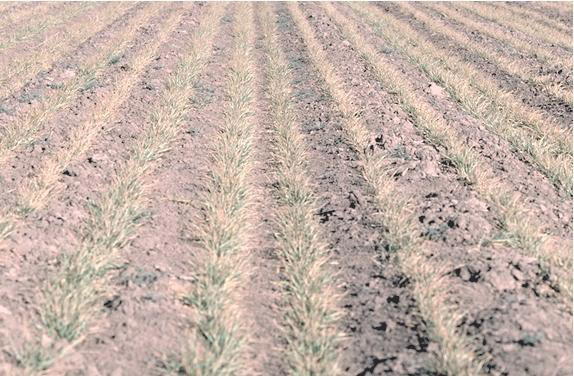 The brown wheat mite damages wheat plants by destroying plant cells as it feeds, causing a stippling of the leaves. Brown wheat mites have a tendency to feed on the tips of the leaves, causing them to dry out and die. Heavily infested fields present a scorched, withered appearance.

Brown wheat mites are metallic brown to black, and about the size of a period in ordinary newspaper print. Their legs are pale yellow, and their forelegs are distinctively longer than the other three pair of legs. 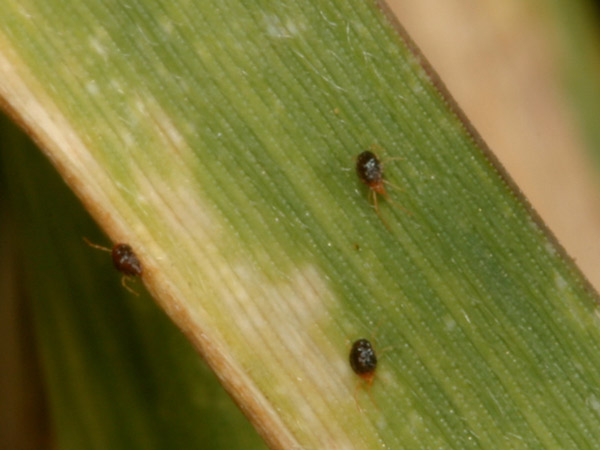 Females of the brown wheat mite are known to lay two types of eggs. Both types of eggs are laid on soil particles near infested plants. During the winter, females lay nearly spherical, cherry red eggs that can hatch in a week with favorable weather. In the spring, females lay white eggs with a waxy coating and a ruffled cap that do not hatch until fall. No one female can lay both types of eggs.

By this time of the year, most brown wheat mite infestations are in the oversummering (white egg) stage. 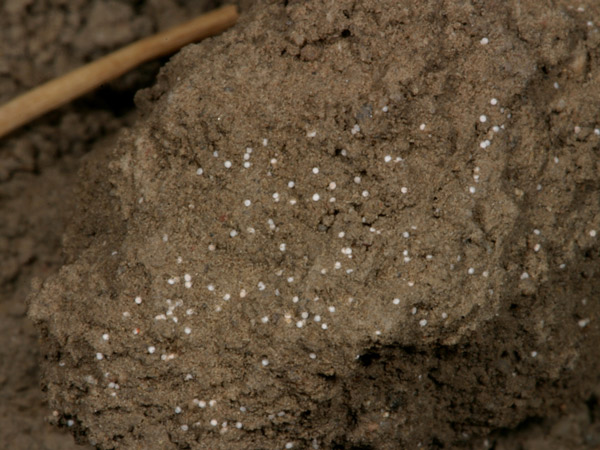 A severe infestation of brown wheat mites will reduce wheat yields. It’s far too late now to spray for the mite and try to protect yield potential. But what can producers expect to happen next season on these severely infested fields? Can they survive in the same field over the summer? Can they overwinter and cause a problem again next spring?

The life cycle of the brown wheat mite provides an answer. Brown wheat mites pass the summer as diapausing (resting) eggs in the soil. These eggs hatch in the fall as temperatures and moisture conditions become favorable. One or two generations can develop in the fall, multiple generations during the winter, and another two or three generations in the spring.

They can survive cold temperatures without any problems, but their populations can be quickly reduced by a beating rain. The brown wheat mite historically has been a problem during drought cycles in western Kansas. It is generally only a pest on continuous wheat or where volunteer wheat was allowed to grow on summer fallow ground.

So yes, brown wheat mite lives over the summer in the form of resting eggs in the soil. If wheat plants or another suitable host is present when the eggs hatch, the mites will then multiply during the fall and winter. Alternate hosts include sorghum, barley, cotton, clover, and alfalfa. Volunteer wheat is an important host in establishing a green bridge to planted wheat. Controlling volunteer wheat is important in reducing the potential for brown wheat mite infestations.

Whether an actual infestation will occur again on the next wheat crop depends on the weather. If it’s very dry again, then the mites that occurred and multiplied this year could cause a problem again next year – maybe even worse than this year. As a result, producers and consultants will want to be watching fields very closely and early for brown wheat mites next fall and spring if it’s dry again. If growing conditions are more normal next season, however, and there are periodic driving rains, brown wheat mites should not be a problem next season even on fields that had an infestation this year. Again, controlling volunteer will help in either case.

The economic threshold for this pest is not well defined, but it is at least several hundred mites per row-foot in the early spring. Making a decision to spray for brown wheat mites is difficult since infestations almost always occur on drought-stressed wheat with low yield potential. Also a driving rain of at least 1/3 inch will significantly reduce their populations even without an insecticide.

For more information on the brown wheat mite, see: http://entomology.k-state.edu/extension/insect-information/crop-pests/wheat/brown-wheat-mite.html